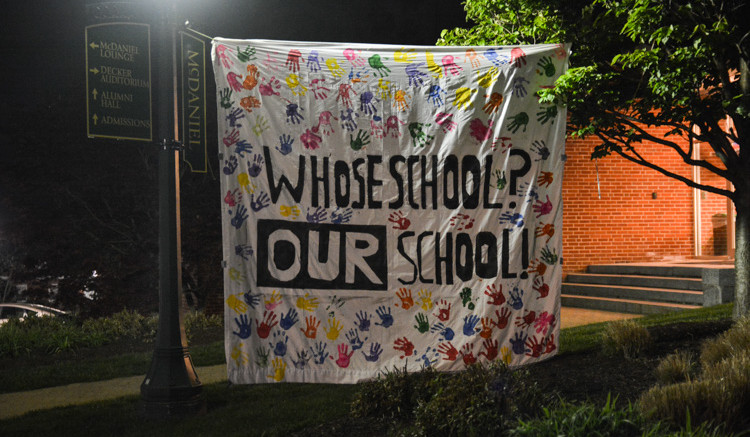 On April 21 at 8 p.m., students, faculty, staff, and administrators gathered in Decker Auditorium for a town hall meeting hosted by Progressive Student Union and moderated by sophomore Tyler Van Dyke.

The event started with a presentation by freshman PSU members SG and Theodora Westlake-Stearns. The two highlighted the organization’s concerns, which include concerns about where students’ money is going, tuition hikes, blaming the unionization of campus Sodexo workers for an annual board price increase, and McDaniel operating like a business.

Overall, asserted G and Westlake-Stearns, PSU’s concerns are based on a desire to see McDaniel flourish and integrate more of a student voice in decisions. Specifically, concerns existed around wages for Sodexo workers (who they claimed make a median wage of $8.80 per hour) and adjunct professors (who make more or less $3000 per course). On these issues, they criticized McDaniel for going against its mission statement by perpetuating income disparity.

Additionally, the dynamics of this year’s tuition increase letter were of concern. The two cited the letter as spending a lot of time praising a liberal arts education then using unionization as the only specific reason for a board price increase.

Lastly, the two laid out a list of demands: more openness for budgetary meetings, recording salaries of administrators and management (and that they shouldn’t have raises/bonuses unless other employees do), more availability of the budget for viewing, administration respecting the right to unionize, tuition should be a locked rate for a student’s entire education, and that students should have the same McDaniel Plan requirements for their entire time at McDaniel. 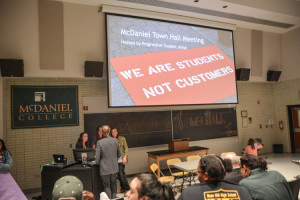 Next came the actual conversation: a panel of four individuals was formed at the front of the room. Panelists included President Roger Casey; Julia Lau, a current adjunct professor working for a union; Eric Mickel, who works grounds maintenance; Manuel Gonzales, a Sodexo worker; and Nzingha Campbell, a freshman PSU member having difficulty financing her education. Each panelist highlighted the dynamics of his/her situation.

The floor was then opened for student questions. This was a time for members of the McDaniel community to ask whatever they have been hoping to know about the institution. Many questions were for President Casey and Professor Lau, who, at the moment, has been let go for the coming semester.

The question topics ranged from McDaniel’s lowered credit cap, President Casey’s salary, the prospect of more student participation in decisions, the workers union for campus Sodexo employees, the prospect of an adjunct professor union, and even to housing costs, among many others. Students were able to receive answers directly from President Casey and the other panelists.

This portion of the event was concluded by a talk from Caroline Unger, another PSU member. She recapitulated many of the organization’s demands and viewpoints then invited those in attendance to walk around the auditorium to various sheets of paper to discuss specific issues in detail with others.

On the event, Freshman Christopher Shatzer states, “I’d say [the event] was definitely very helpful. It showed the rationale of various groups and I definitely think more discourse would be great. I think we should have more of these.” His only concern existed in the confusion that occurred with some questions, saying, “I think it took away from time for other questions.”

Professor Julia Lau was happy with the event and agreed that the dialogue was productive. However, she notes, “I wish everyone had more or less equal time to speak.”

G states, “I think there was a little bit of focus on some things that weren’t necessarily what we wanted to focus on, but I still think it was a really valuable place for people to engage on these issues.” Nonetheless, she was happy with the event, stating, “It was telling to see that there were so many people involved in this. It’s something that crosses lines in ways that others don’t, so I think it was really great to have all of those people and those voices in the same room.”

Westlake-Stearns asserts, “I think it’s amazing that we were able to have a packed room.” She, too, was concerned with the relevance of some questions, but overall says, “I feel like a lot of information was shared tonight and this is the start of a larger process towards creating change on campus.”

Is College Worth Your While?