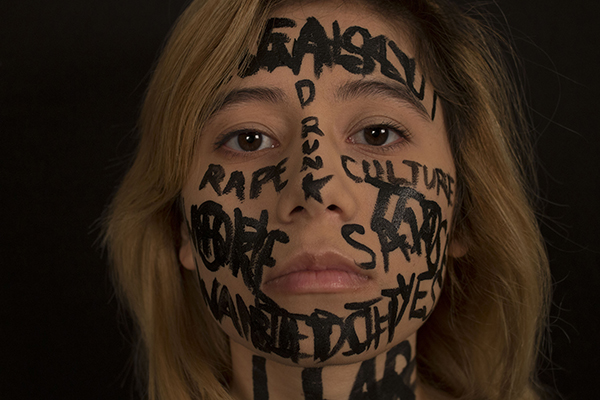 As spring settles in at McDaniel, seniors frantically finish up their capstone projects and freshmen fear their upcoming finals. Things are no different for the students in the Art Department. On April 13, the first leg of the Senior Art Exhibition opened in the Rice Gallery. The drywall partitions yet again were arranged in a maze of angles, the art that occupies them not failing to disappoint.

Ranging from paintings to prints and even digital work, six brave seniors displayed and discussed their retrospective college work. Students’ work revolved around a subject that was important to them and that had affected their life in some way.

For example, Jennifer Brown focused on art influenced by psychology. Starting as a psychology major, Brown decided to switch her major to art in her junior year. Her prior study of psychology played a big part in her projects as an art major. Her work displayed prints commenting on anxiety and how what some people view as “good advice” can actually be harmful and certainly not helpful to an anxious person.

Another student, Sarah Lighter, has always been passionate about the environment, and consequently her capstone project focused entirely on the subject. Her exhibit was an interactive video game where participants were encouraged to participate in a number of environment-based digital activities such as cleaning simulated trash out of the Nile River.

Adriana “Summer” Villarosa’s work revolved around rape and rape culture, as she herself has had multiple unfortunate experiences with these. One of her pieces was a wall of 100 hanging condoms with only two highlighted in order to represent how only two percent of sexual predators become convicted of their heinous crimes.

While many of the students were nervous to present their speeches to the public, there was no real need to fear, for their presentations were excellent and their exhibits were magnificent. The students presented many important topics and gave the audience much to think about with their visual representations and aural discussions. If you get a chance, it is absolutely worth the time to stop by the Rice Gallery and take a look at the Senior Capstone Exhibitions.