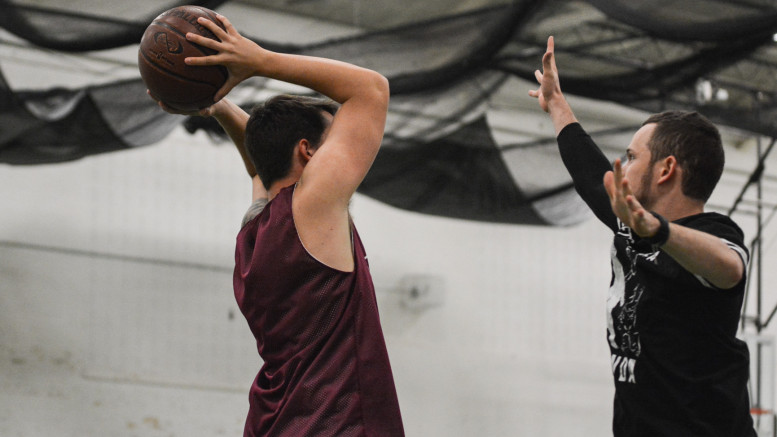 Sheaffer attempts to block a pass during a game on Nov. 9. Photo by Kyle Parks.

McDaniel’s Intramural Basketball program began its annual season on Oct. 31 and continues to provide a reasonably competitive, fun, and social environment. Steve Corrieri, the head coach of men’s soccer at McDaniel, who also oversees intramural sports, states that intramural basketball is “an opportunity to release some energy and to have a little bit of competition, but not to the point where it’s all about winning – it’s more about participating, having fun, socializing with their friends, and meeting new friends.”

Intramural sports, as a whole, are non-selective sports, providing any interested students with a place to escape from the stresses of college life and assist in mental and physical rejuvenation. 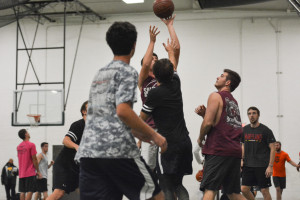 Players of two teams struggle to retain control of the ball as one team goes in for a dunk. Photo by Kyle Parks.

Intramural sports bring many benefits to students. Among these, found Benjamin D. Smith in research he conducted at Indiana University, are stress-coping strategies, a feeling of accomplishment, physical well-being, and building friendships, to name a few.

Students involved in the sport see clear benefits to their participation. Intramural basketball player Zachary Sheaffer states, “It’s a good chance to hang out with your friends and physical fitness is rewarding for obvious reasons.”

Corrieri adds, “Basketball is very much an American pastime, so kids have grown up playing with it since they were little. It’s very easy, low maintenance, low cost – it’s simply a ball and a hoop.”

Sheaffer also sees very clear social benefits to the game, saying, “I think all of us have become better friends because we play basketball together. We all come from different backgrounds and different areas, and I think we got to know each other better through the game.”

The 12 teams comprising McDaniel’s intramural basketball league are often formed by friend groups or preexisting organizations, with approximately 10 students per team compared to the 15 on McDaniel’s men’s team and 19 on the women’s team. According to Sheaffer, fraternities, for example, form teams with their brothers, though many teams are also comprised of friend groups, adding to a more intimate atmosphere.

Adding to this, intramural basketball player Mark Gales, states, “It’s a fun activity to do with friends, and it’s fun to play basketball against other teams.” 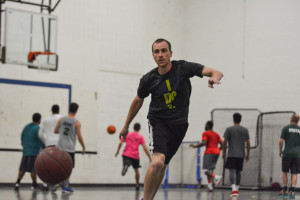 Jane McGrath of HowStuffWorks adds that exercising with a group of friends increases one’s likeliness of staying active. Moreover, there are clear benefits in terms of socialization – beyond making friends, students enjoy being part of a group. Ideal for busy students, Intramurals are a less significant commitment than team sports, affording students more time to devote to academics and other activities.

A level of competition is necessary and inevitable, even in intramural basketball. Corrieri asserts, “Obviously, somebody’s got to win. That’s just the nature of competition and athletics. That’s why you enter teams—to see how well you do—but that’s not the focus.” Additionally, Gales adds, “Some teams we play are more competitive and take it more seriously.” McGrath states that due to this less competitive atmosphere, intramurals aid in character development to a greater degree than team sports.

Teams are scheduled to play based on availability and rotate to play others. According to Corrieri, “It’s a pretty standard format. You have X number of teams and they just play the other teams to see ultimately which is the best team in the league.” Sheaffer extends this, saying, “At the end, a few teams go to playoffs, and that’s where the better teams will be facing off.”

In the end, intramural basketball provides students with a low-stakes, though reasonably competitive, space to blow off some steam and build friendships.

Those with an interest in joining an intramural team—for any sport—can visit McDaniel’s IMLeagues website or email Corrieri at scorrieri@mcdaniel.edu.