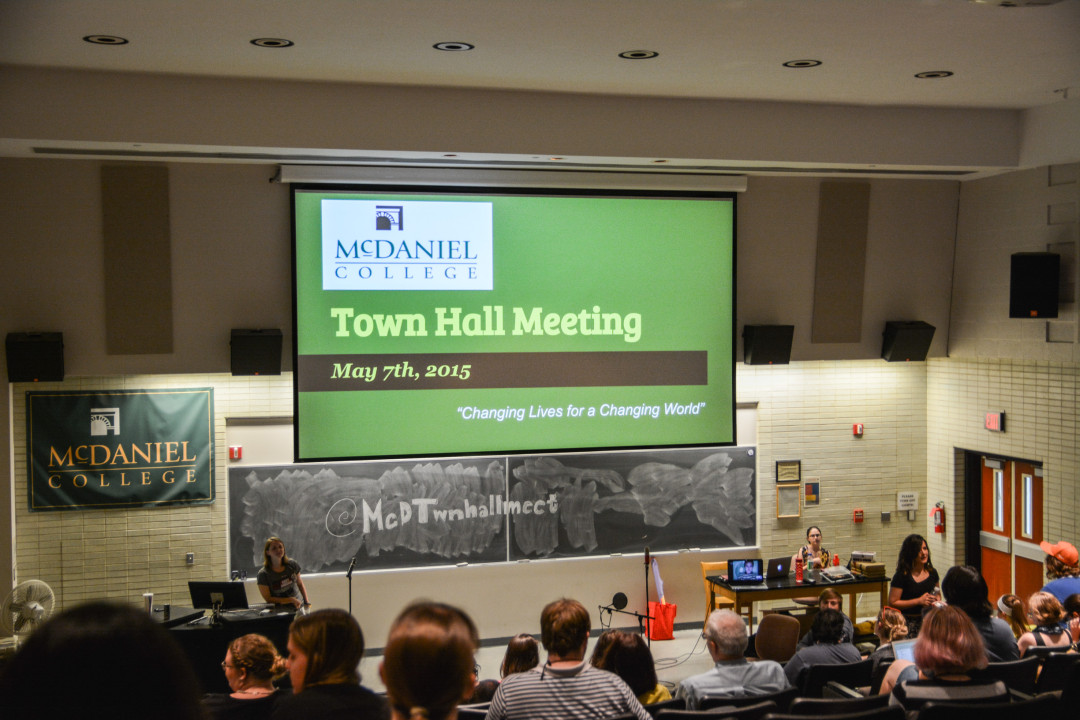 Recent changes to meal plans, a tuition increase and other key issues have left many students upset lately here at McDaniel. However, on Thursday May 7 at 5 p.m., a variety of students, faculty and administrators gathered in Decker Auditorium to discuss these concerns.

The meeting began with a speech from junior Kamiko O’Rullian, the recently elected president of the Student Government Association. O’Rullian outlined the purpose of the meeting as well as the successful change to meal plans that a student petition brought, which students are generally grateful for. According to O’Rullian, similar meetings will be held with regularity next year.

Students, faculty and administrators shared what they know about current issues on campus and received answers. There were even a few answers provided directly by administrators.

This event was organized entirely by students from various organizations, including the Progressive Student Union, Student Government Association and Real Food Challenge. The goal of this event was to promote dialogue between students, faculty and administration as well as to allow student voices to be heard.

According to sophomore Jamil Elfahdi, one of the organizers, “Students, for the most part, don’t know where to turn to when they want to voice complaints or when they want to ask questions about new policies.”

Sophomore Adrian Plaisance, who also helped organize the meeting, said that the meeting was meant to be solution-oriented, although many policies have been solidified for the coming academic year, but the meeting will nonetheless promote student-administration communication, which has been lacking.

This meeting was not just for students — many faculty and professors joined in due to their concerns with transparency as well. 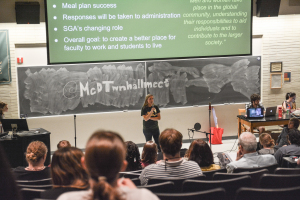 Students voice concerns about administrative transparency during the May 7 Town Hall Meeting.

Elfahdi had spoken to many of his professors, and they seconded many student concerns and supported the idea of a meeting. This was also apparent during the meeting, with multiple professors and faculty joining in the conversation and some even praising the effort put forth by students for it to take place.

Ultimately, students believe that the McDaniel community can only benefit from such meetings. Plaisance said, “This is really the launching point for what is going to happen next year.”

However, the meetings are not meant to just limit power of administrators, but instead to promote communication between students, faculty and administration in the decision-making process.

“We recognize that decisions are ultimately up to the administration and that, in some ways, they can’t be in our hands, but what we hope this meeting brings attention to the fact that there are a lot of students who have transparency concerns,” Elfahdi said. “Even though administration makes the final call, we’re hoping that they will listen to us and that they will consult us to see how we feel about these decisions before they’re made.”

Minutes from the event will be made available to the McDaniel community.

The Building Blocks of Bernie