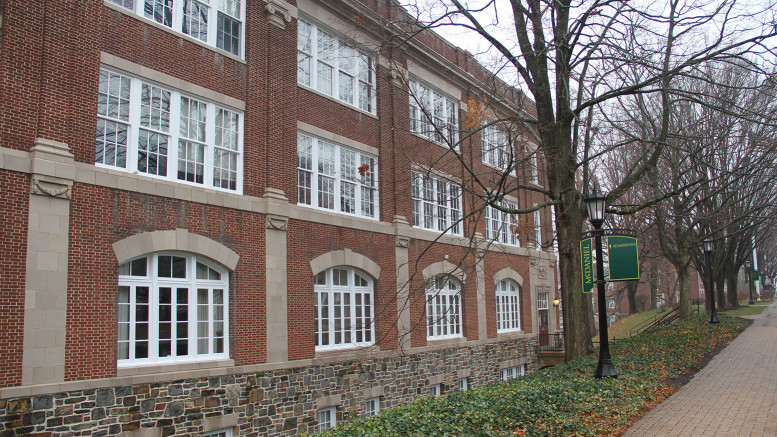 On Monday, Nov. 11, the second “Ask McDaniel Anything” forum gave students a chance to ask the administration any questions they may have. Event posters advertised a chance to speak with Dean Liz Towle and Dean Josh Ambrose, as well as special guests Provost Julia Jasken and head of I.T. Andrew Lawlor.

In attendance that night were Towle, Vice President for Enrollment Janelle Holmboe, Head of the I.T. Help Desk Wes Yerkes, I.T. Infrastructure Director Dave Arnett, Title IX Coordinator Jennifer Kent, and Director of Student Engagement Amanda Gelber. Students from Progressive Student Union and the author of this article were also in attendance. Below is an overview of the main topics covered during the hour-long meeting in Hill Hall.

A question regarding the extension of library hours was raised at the first “Ask McDaniel Anything” forum earlier in the semester. At this second forum, students asked once more about this possibility. According to Towle, she had followed up with Elizabeth Davidson, co-interim director of Hoover Library, when the question was first raised.

“They were trying to get the library open until 2 a.m. Unfortunately, they couldn’t find students to staff it. And so they weren’t successful in extending the hours early in the semester,” Towle said. “My understanding is once everyone is back from Thanksgiving, as we approach the last week of classes and exams, the hours will be extended. They are staffed and ready to go for that.”

Towle then explained that in the next 10 days or so, Campus Safety is hoping to have Ensor Lounge open much later as an alternative study space.

“They’ve finally figured out how to secure just that space,” Towle said. “Eric Immler, the director of Campus Safety, is working with Physical Plant about getting the locks in place where they need to be in place so that Ensor can stay open longer. I think the other thing we need to do is to keep all the lights on in there. So that’s coming.”

Along with the lack of overnight library hours, students raised concerns regarding late-night access to the library, citing cases where students were unable to use their ID cards to access Charlson Lab.

Yerkes explained that first-year students received new ID cards in order to swipe in to first-year dorms. These cards work on a different frequency and have different card chip technologies. While the College was assured that the new ID cards would work with both the new Blackboard Transact system and the old Honeywell system (which is in place in the library doors) during the transition of upgrading all doors to the new system, this has not been the case.

As a temporary solution, students wishing to access the library after 9 p.m. are being issued old cards that work with the Honeywell system.

Several students then raised concerns regarding internet connectivity. Yerkes explained that students should use McDaniel Secure to access BlackBoard and other McDaniel sites, while McDaniel ResHall Special is only for gaming devices. He encouraged students to stop by the Help Desk for more specific concerns and stressed the importance of telling I.T. where on campus students are experiencing internet issues so the staff can better shape the signal.

In regards to the slower speeds this semester, Arnett cited more demand due to the large incoming class. However, they are in the process of adding another provider to increase bandwidth.

“Ting is the other provider now. Before, the College just had Comcast. So if we had an outage for Comcast, we didn’t have a backup,” Yerkes added. “Now we have two pipes, so if one goes down, we have the other one.”

If students have an issue, they should come to the Help Desk with their device so the I.T. staff can diagnose the problem.

“Getting more data from everyone is helpful so then we can find patterns,” said Arnett. “The more people report it, the better.”

Then, the I.T. representatives were asked which circumstances would prompt the Provost to order I.T. to redact emails sent by professors.

“I can’t remember specifics of them, but there have been a few times when either incorrect information or data that should not have gone out [was emailed],” said Arnett. “In my experience, it’s been when there’s been some major mistake that needs to be corrected. I don’t know if there’s a specific policy on that.”

Yerkes added that, in his experience, drafts with “misspellings or wrong information” would be accidentally sent before proofreading. In these cases, I.T. would be asked to pull the email, and then the sender would revise the email and send it again.

Both representatives stressed that there is no gatekeeping and emails should go through as soon as they are sent.

“The president and provost were looking for a partner institution for a cohort of students who wanted to complete their kinesiology degree at a U.S. institution,” Holmboe said. “What was preliminarily developed was a 2+2 partnership where this cohort of students would start at their Chinese university and then come to McDaniel for the last two years of their education and complete their kinesiology degree.”

In developing this partnership, President Casey and Jasken have been visiting China and Anhui University has been sending delegates to McDaniel. However, according to Holmboe, a month or two ago, the Chinese government eliminated all 2+2 partnerships with the United States. They are now only supporting 3+1 partnerships where students would come to the U.S. to study for one year.

“We’re still working to pursue that. However, we all understand that with just a tweet, probably, that program could no longer continue based on Chinese policies,” Holmboe said. “The earliest that this would happen I think is 2022 now. Those students would still have three years at their Chinese institution before coming here, so it’s not an imminent program, but it is something we continue to develop as a potential opportunity.”

At this time, McDaniel is looking to invite a single cohort of 20 to 30 students, as opposed to the initial plan of several larger cohorts.

Students had multiple questions regarding McDaniel’s plans for sustainability. PSU suggested the use of native plants for landscaping instead of invasive species, being more thorough with separating trash and recycling, setting goals for Decker construction to make the building more green and energy-efficient, taking steps to avoid pollution during construction, and setting up a permanent compost option in Englar Dining Hall.

Towle promised to ask about any potential green initiatives with Decker construction and then report back. Gelber explained that The Weekly will publish updates about Decker and The Arch has an Ask McDaniel Anything page for additional information in between forums.

In closing, Towle reiterated that she would start talking with AVI about composting options, touch base with Physical Plant to gather information about recycling concerns, and follow up with I.T. about ID card access. The next “Ask McDaniel Anything” forum is scheduled for February.