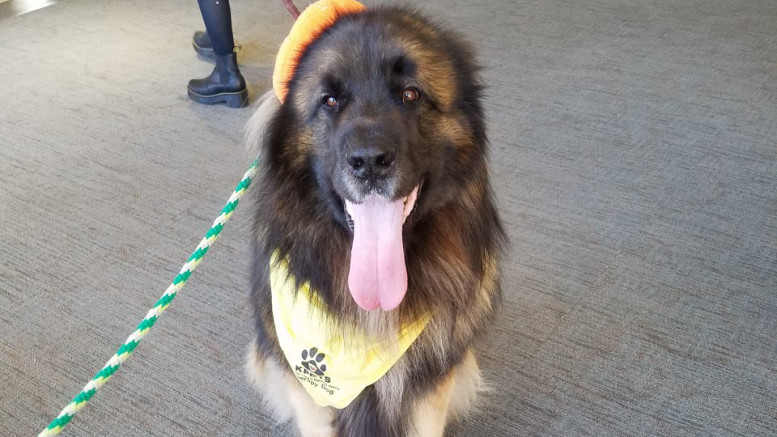 They say that dogs are a man’s best friend, but could they be man’s best therapy, too? It has become increasingly popular to bring therapy dogs to college campuses because of the stress relief that they bring to students.

According to BBC, “Therapy dogs are used in more than 1,000 universities and colleges in the US,” and McDaniel College is one of them. For quite some time now, McDaniel College’s Wellness Center has been working closely with Keystone Pet Enhanced Therapy Services (known as K-PETS), a therapy animal organization based in Lancaster, Pa.

“The therapy dogs have been coming to campus for several years,” said Erin MacDougall, Ph.D., a Wellness Center staff psychologist. “Typically we schedule them to visit Rouzer and Whiteford several times in September and October. We also try to bring them to common areas on campus (ex: Decker College Center) during periods of high stress (ex: mid-term and end of the semester). Most recently we have brought them to the library to help students prepare for their final exam.”

Although the dogs from K-PETS will most often make appearances during the times of the year that are considered most stressful, many McDaniel students would like to see the dogs come to campus more frequently because of how they can help with stress, anxiety, homesickness, and missing pets at home.

“It seems like they should be here more often,” said one anonymous student. “College is a stressful time for all of us. Some of us are hours away from home. I miss my rabbit.”

Jan Crozier, owner of K-PETS therapy dogs Teddy and Bear said, “I’ve had students come and spend the whole hour because they are so stressed and say ‘this is what I needed today.’”

A 2016 study investigated how helpful therapy dogs were for helping homesick first-year college students. The study looked at a treatment group that participated in an 8-week program where the participants had one 45-minute session a week. They spent 30 minutes with an assigned therapy dog and could interact with any dog there during the last 15 minutes. According to the study, “The results showed that the intervention was successful in decreasing homesickness and increasing satisfaction with life.”

Because of the positive responses that the therapy dogs have received, some colleges have adopted therapy dog programs that are permanently on campus. The law library at Yale University has a therapy dog that lives there that students can check out for 30 minutes at a time. He is even listed in the library catalog. The University of Ottawa has a dog who has office hours every two weeks, and students can sign up with appointments with her. Goucher College’s Academic Center for Excellence has a labradoodle named Lucy on their team who is “trained in unconditional love and available for hugs and de-stressing.”

When asked if McDaniel College might ever have something similar, MacDougall stated, “It would be great to have a therapy dog in residence. I don’t know whether the College would support one. As the handlers attest, training and working as a therapy dog is a significant undertaking.”

It may take some more convincing before the College considers having an official therapy dog on campus, but at least students can keep looking forward to more therapy dog events.

“We see them as an important part of our outreach program now,” MacDougall said.

What Defines A Hipster?