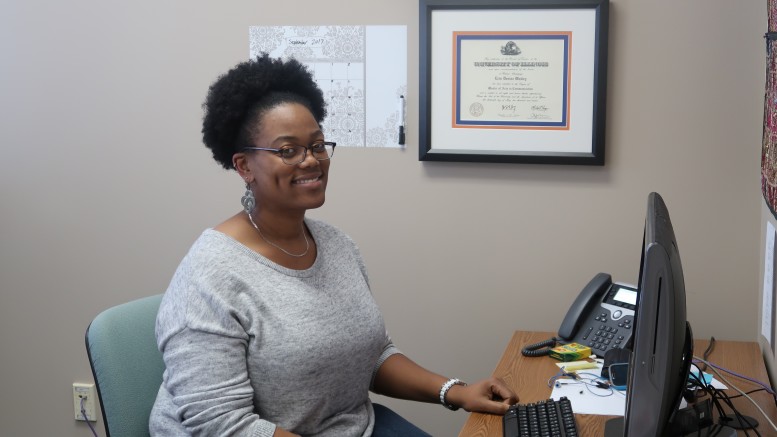 “If you don’t see something being done, then you’ll think that you can’t accomplish it. If you don’t see a young black professor that’s a doctor, then you may think you never have the potential to become a doctor,” says senior Communication major Tiara Alston.

Dr. Erin Watley came to McDaniel College last year as the newest addition to the Communication and Cinema Department. While she boasts a Ph.D. from the University of New Mexico, at the heart of this 32-year-old African American professor lies a woman with the dream of building cultural bridges in places where they are lacking.

“I’ve always been really interested in culture, in general, and my own culture growing up as a black person in the suburbs,” Watley says. “When I was a little kid, I would read all these books about slavery. I’ve always wanted to know more about people’s experiences.”

After working for three years after graduation, she realized that a lack of understanding about cultural differences in the workplace negatively affects the work environment.  She decided to pursue her doctorate degree in Communication with a specialization in Intercultural Communication at the University of New Mexico.

After receiving her Ph.D., the Silver Spring native decided to move from New Mexico back to her family in Maryland. “McDaniel was one of the first jobs I heard about that was closer to the area. I’m from the area, but I’d never heard of McDaniel, admittedly,” Watley says. “I looked it up. Then people started telling me about it when I told them I was thinking about applying.”

Jonathan Slade, head of the Communication and Cinema Department, says that when Watley is around, they “can have a bizarre, non-sequitur conversation about teaching that’s humorous, but also honest.”

This isn’t the only praise she’s received from colleagues.

“Erin is very easy to adjust to. She has a great personality. The number of students I see visiting her office, and the laughter I hear suggests she’s somebody that students can easily connect with,” says Communication professor Robert Lemieux.

Among students, Watley is known for including discussion-based activities in her classes, and challenging the norms of society represented through media. Alston says Watley is “eager to help me out no matter how the question was phrased, even if I asked it in the wrong way, she’ll understand what I’m saying and be eager to help me.”

“Last semester, I was the only black person in my class, and her being a black professor sets an example for the generations to come – especially with younger people,” Alston says.

After being at McDaniel for a year and a half, Watley has translated her insight for cultural awareness into real conversations. As the campus community continues to grow in diversity and population, Watley believes it is important for the faculty to represent its students.

Slade says that Watley “brings so much more to us in the classes that she teaches. It’s become mandatory to have somebody on campus who can help guide through this current social landscape.”

Where in Westminster: Longwell Armory