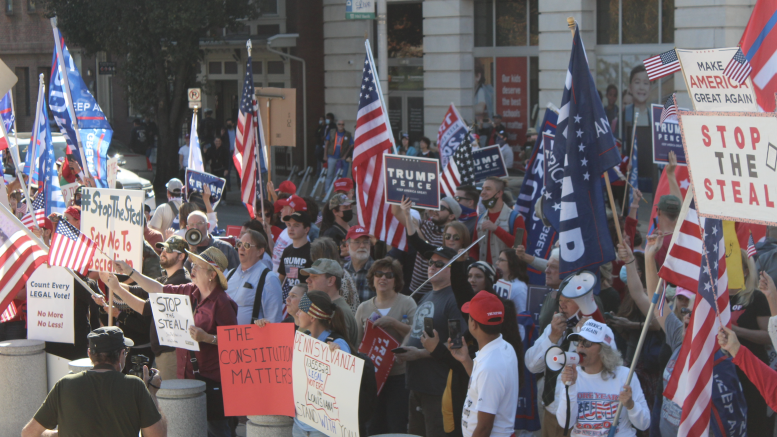 Last Wednesday a mob of Trump supporters stormed the Capitol building, halted congressional proceedings, and an emergency recess was called in an effort to protect the congressional representatives present. Members were engaged in the democratic tradition of counting the state-certified results from the Nov. election. The disruption ironically came as Republican lawmakers were wrongly objecting to the Arizona results; these objections were based upon the widespread belief of election fraud among their constituents.

It is not a surprise that Republican voters believe in election fraud because President Trump has been cynically claiming fraud about the election since the day he lost. The emotions and historic weight of the pro-Trump rampage is enormous. Donald Trump bears most of the blame. However, the politically polarized climate provided the preconditions for this to occur.

GOP lawmakers like Rep. Adam Kinzinger have begun to make calls for removal and Democrats have started to draft articles of impeachment. Their efforts for removal are appropriate but will likely not work given that Trump’s term ends on Jan. 20. The events that happen on the hill were horrific and the temptation to forget them is appealing, but Americans ought to resist that impulse and engage in serious reflection.

Specifically, reflection upon not only why a group of Americans would attack the most sacred institution of democracy but also how their leader, Donald Trump, could rise to such enormous power and obtain the highest executive office in the U.S. Many believe the economic status of the white working-class lead to the Trump Presidency; however, the data suggest that political polarization is the primary reason for the rise of Trump.

In their National Review piece The Working-Class-Party Myth, and What Really Motivates Voters, George Hawley and Richard Hanania explained that conservative intellectuals, such as Oren Cass and Julius Krein, have formed think tanks created with the presupposition that “Trump’s rise demonstrated important blind spots in conservative thinking.” They suppose that “The doctrinaire laissez-faire approach to economics was insufficient to improve economic conditions for many Americans who suffer from outsourced jobs and stagnating wages.”

These conservative populist ideals appeal to Trump’s exceptional performance in the Rust Belt and Appalachia, regions that suffer from severe economic stagnation. J.D. Vance’s in Hillbilly Elegy beautifully articulates this reality. However, the problem with this “economic anxiety” narrative as Hanania tags it, is that the data does not bear that thesis out. Hanania says:

Since 2016, political scientists have sought to explain Trump’s rise. Again, and again, they have concluded that economic hardship was not strongly associated with support for Trump. Attitudes toward issues such as immigration, differences between religious identities, differences between men and women, the “marriage gap,” and support for or opposition to so-called political correctness were much stronger predictors of support for Trump than objective economic standing.

In her research article “Status threat, not economic hardship, explains the 2016 presidential vote,” Diana C. Mutz, Ph.D., a political scientist at the University of Pennsylvania set out to make sense of the Trump phenomenon. Mutz examined what she called the “left behind” thesis, and her research found that Trump voters were not particularly excited about “pocketbook economic concerns.” Conversely, she found that “Candidate preferences in 2016 reflected increasing anxiety among high-status groups rather than complaints about past treatment among low-status groups. Both growing domestic racial diversity and globalization contributed to a sense that white Americans are under siege by these engines of change.”

In their research article “The White Working Class and the 2016 Election,” Nicholas Carnes of Duke University and Noam Lupu of Vanderbilt University test a similar hypothesis regarding the working-class support for Donald Trump. They utilized all available academic survey data around the 2016 election. Carnes and Lupu found that the available data cast doubt on the supposition that Trump uniquely appealed to working-class Americans. They found that “White working-class Americans have been supporting Republican presidential candidates at higher rates in recent elections, but that process long predates 2016.” These two major studies poke significant holes in the theory that asserts economics was the central reason for Trump’s rise; they suggest that the polarizing culture war issues were the dominant motivating factor for Trump voters.

Oxford Learners’ Dictionaries defines polarization as “the act of separating or making people separate into two groups with completely opposite opinions.” This definition accurately articulates American politics when it comes to the culture war. This is consistent with years of political science. Hanania and Hawley suggest that decades of research has shown that voters are not primarily motivated by their economic condition, conversely, the cultural issues bring people to the ballot box.

The Pew Research Center found that “Republicans and Democrats are more divided along ideological lines – and partisan antipathy is deeper and more extensive – than at any point in the last two decades. These trends manifest themselves in myriad ways, both in politics and in everyday life.” This 2014 Pew Research finding makes sense of the events last Wednesday and they continue to prove true as the years progress.

This political divergence started with the American elite and bled over into the feeling of many lay Americans. Historically, both the Republican and Democratic parties had both Conservatives and Liberals within their parties. The parties allowed for a range of opinions; leaders from both parties could work together on legislation. In other words, there was a crossover on the ideological spectrum.

In his book “Unstable Majorities”, Morris Fiorina, Ph.D., explains that we no longer see a significant range of ideological diversity within the American political parties. Hawley, in his essay “What Really Happened in the Last Presidential Race,” argued that “For now, both parties have electoral incentives to maintain our current divisions. I suspect polarizing campaigns will be the norm for the foreseeable future. It is a concerning prospect that our political parties are complicit in the polarization of the electorate.”

The political system is leading to a polarized America, which has damaging consequences. The political polarization is the primary reason for the rise of Donald Trump, the disgusting display at the Capitol, and the overall increase in political violence over the past twelve months. Americans must tarry to find common ground and pivot from the ideological fringes in order to avoid future lawlessness and ensure the health of the republic.