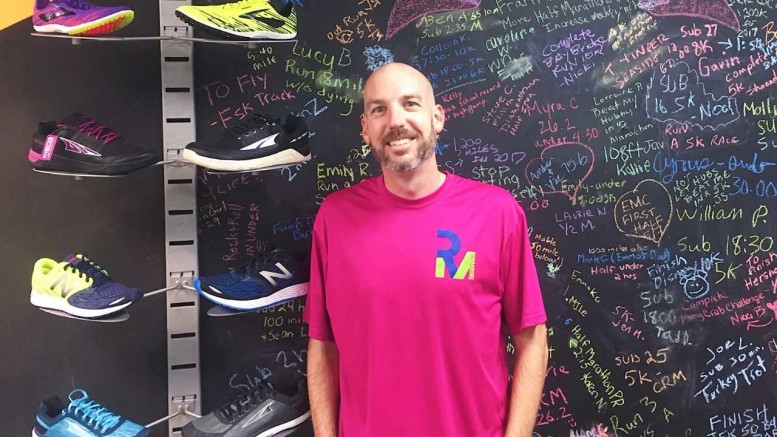 Across from the collection of sports snacks, beyond the racks of leggings and t-shirts, and next to the display of running shoes under street signs for “Performance Drive” and “Stability Street” hangs a chalkboard labeled “Run Moore Goals.” This special corner dons visitors’ goals such as “break school record for high jump,” “heal,” “beat brother-in-law in Disney 5K to win the respect of my spouse” and “to fly.”

Since 2014, Steve Moore has served the running community by opening up Run Moore, a running gear store on Westminster’s Liberty St. Moore’s use of gait analysis — Run a process in which customers are filmed while in motion to determine what shoes will fit them best — caters to runners in a personal and in-depth way, taking the guessing game out of training, footwear and proper preparation for any stage of the running process. Run Moore also serves as a hub for information and involvement in the running community.

“The running scene is pretty great at McDaniel,” said student-athlete Sydney Gonsalves, whose track and field coach recommended she visit Run Moore early last year. “We have a strong network, and Run Moore supports and sponsors a lot of community events to build that network.”

“It’s not always about buying something,” said Moore, 37, a daily runner who hits six feet tall. “We want you running for the long-term. We love geeking out on running. I like to think having us here, as an ally, as a guide, as a resource — we are hopefully the pulse of the running community.”

Running has always been a passion for Moore. “I was always that kid who loved to run,” Moore said. When he was just 6 years old, Moore had a neighbor who would take him on mile runs. Though Moore started off back-of-the-pack slow, running stuck with him as something he wanted to do for the rest of his life.

As a kid who read Runner’s World magazine cover to cover to a high school coach at Westfield High School in Chantilly, Virginia, Moore had always been interested in form and running mechanics. “All these years, I had been learning by reading, practicing, and doing,” Moore said. “I had been taking in all of this information and looking for an avenue to use it.”

Before Run Moore, Moore was in the food and beverage industry in outside sales. He and his wife had talked for years about opening up a restaurant, but his passion stayed in running.

“I always wanted to be my own boss and run my own business,” Moore said. “I was working in restaurants, and all I thought about was running.”

Within the first week of his second son being born, he hatched the idea of a running shop. A friend of his suggested visiting the Carroll Business Pathway, a resource for people in the Carroll County community to pitch business ideas. Within three weeks, he had pitched the idea and had gotten feedback on the very first business steps.

“This was my first big, intimidating sit-down with somebody,” Moore said. “I knew if I couldn’t convince this guy, whose job is to open up businesses, that this is going to be feasible, the idea will die right here.”

Moore’s son was born in February. By April, he was looking for retail spots.

During the first year, Moore still worked a full-time job and returned to Run Moore on evenings and weekends. His balance relied heavily on planning and adaptability. “Say yes to everything and find a way to make it work,” Moore shared.

The initial community feedback allowed Run Moore grow and strengthen, and currently, there are about a dozen employees on the Run Moore crew. Because of Run Moore’s success, Moore now has time to devote to other projects.

Peter Christiansen, an avid runner on Moore’s support team, described being involved in multiple projects as “the Steve thing.”

Moore also has a radio show on WTTR every Saturday at 7 a.m., a newsletter disseminated every month, a running blog, a video blog and two new titles: professor of an upcoming trail running class at Carroll Community College in the spring and president of an upcoming indoor track at the Shipley Arena in Westminster.

“We’ve been told that if an indoor track does not get built in two years, they’re cancelling indoor track at the high school level for the entire county,” Moore said. “I’ve taken it as a personal responsibility. We now have our nonprofit status and are ready to start fundraising.”

Steve Moore is also involved in various running events. Last year, Moore was on the management side of 39 races.

The first 5K he created, Bolt for Bolts, in Littlestown, Pennsylvania, was sparked by a simple question from his mother-in-law: “Hey, you run. Can you put on a 5K?”

While Moore’s passion lies in running, he still faces the ebbs and flows of honing his craft. “Sometimes it feels like work. A lot of times it feels like work. We get sore. We get blisters. We still have days where the last thing we want to do is run,” Moore said. “But I know I will feel great when I’m doing it. I think I’ll always be a runner. I hope so, anyways.”

Shoes Across Europe: A Photo Essay