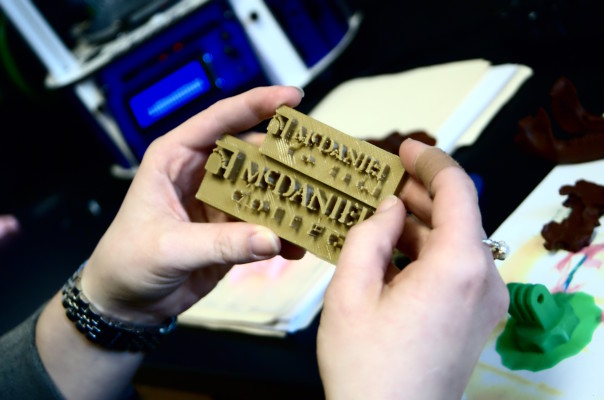 In Eaton Hall, in the corner of Dr. Katie Staab’s small lab, is a small machine that will change the world. This machine, with its three pillars standing two feet tall from the desk looks like nothing at first glance. Then you notice a piece on it that looks very technical, with a pointed tip at the bottom. You look below it to see something amazing, but there is nothing there. That nothingness is what this machine stands for. That blank space represents the infinite number of somethings your imagination can make to fill it.  This is 3D printing. 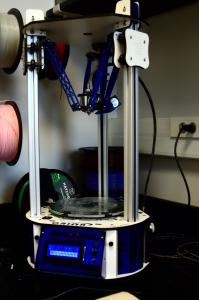 3D printing can be described as the tech trend of the decade. People around the world are creating designs via Adobe and uploading them to the internet for all to print. Designs range from objects like whiteboard holders to GoPro mounts and even violins. This new printer opens up a whole new market where the customer purchases straight from the producer with no middlemen or distributors to drive up cost. Using the word “customer,” however, is a stretch because most printable designs are available for free. The printer can be a massive education tool, especially for the arts and sciences.

Staab, an assistant professor of biology at McDaniel for two years,  purchased the printer for her own research on freshwater fishes.

“Most of my colleagues from across the country have incorporated 3D printing into their research,” says Staab when I meet to talk about the printer with her in her small yet cozy “Staab Lab.”

Last summer Staab attended a collaborators’ lab at the University of Washington, where she learned how to use a 3D printer.  Shortly after, she purchased a printer herself.

“I study bones in small fish like guppies,” Staab says. “However a lot of these fish have bones that are smaller than the newsprint.”

According to Staab, the small size of the fish bones creates a problem in the classroom because it is very tedious to manipulate an object of this size in a classroom. “We have to use a dissecting microscope to manipulate those bones,” she says.  The best way to learn is to use your hands and play with objects whether or not you’re a baby with letter blocks or a scientist working in a lab.

Staab wanted to bring the experience of being able to physically handle these microscopic bones to bring a better understanding of how they work to the classroom, so she turned to 3D printing as a solution to her problem.  Staab does this by sending specimens to be micro CT scanned, a process that can be described as a microscopic version of CAT scans. 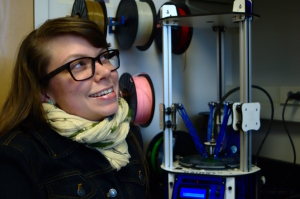 CT scanning is also great for creating 3D virtual models of real life objects.  The lab with the scanner would scan the specimen and send back a 3D model to Dr. Staab.  She then takes that file and run it through software that would blow the model up to a size that can be used for demonstration without having to use a microscope.  She then runs that model through software that looks at the model and make small edits to optimize it for printing and control the printer through the lengthy process of actually printing the object.

Even though the benefits of using the printer as a teaching tool are great, research is still its primary use.

So how do you get a printer to print in 3D? A normal printer uses two motors to control the only two axes it needs to worry about: up and down and left and right. However to print three-dimensionally, you need another motor to control a third axis: out and in. On Staab’s printer, three rails connect to the mechanism that actually does the printing, known as the extruder. Moving a motor up or down along the rail causes the extruder to move up, down and side to side.

But how do you get create something 3D with no prefabricated mold?  The answer is heat.  The extruder on a 3D printer is like a highly advanced glue gun.  The extruder takes in plastic strands and heats up the plastic to 410 degrees, which makes the material melt.  The extruder gets moved into position by the servo motors, where it releases a small but constant flow of molten plastic which, almost instantly after leaving the extruder, cools, solidifying into a hard plastic object.  The printer builds the model in layers, circling around and around until the job is complete.  The time it takes to print something can vary depending on the size and complexity of the object being printed, lasting from ten minutes to several hours.

Staab is not the only professor at McDaniel interested in 3D printing. Writing Center Director Josh Ambrose sent Staab a design that he found online for a mount to attach his GoPro to a tripod. Dr. Jeff Marx has also expressed enthusiasm for the printer and its potential applications in the industrial world.

Staab herself has found her 3D printer to be useful tool around for keeping her office organized.“It’s really handy!” she says enthusiastically.  “My whiteboard has fallen down. We printed a bracket to hold it up.”  She adds, “I even printed the brackets to hang the spools of plastic for the printer,” pointing at one of the many hangers she printed for an equal number of spools which feed the printer.

Even though these machines are pricey, they do pay off, making certain learning tools more affordable. “The anatomy lab has a lot of cat skulls available that I use for my students to learn the parts of a skull,” Staab says. 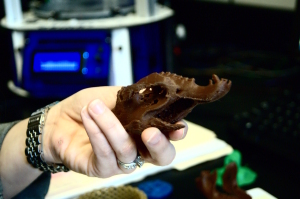 “But cats are carnivorous, and so they have very different shaped skulls than an herbivore like a rabbit.” Staab says that the lab does not have many examples of herbivorous skulls, which can cost upwards of $200 from a biological supply company. Staab says, “If I can print six skulls, I’ve already made the printer worth it.”

Staab predicts that 3D printers will become commonplace. “I think it will be a household item later on, but right now I think it would be opportunistic for other places on campus to get 3D printers and get our students hands on to them,” says Staab, pointing to the library, the art department and the theatre department as areas that could benefit from 3D printers. “I think it would be really really helpful to foster creativity and innovation in our students if there were more opportunities across campus to get their hand on some 3D printing,” she says. “I think that idea is really tractable because it’s come down in price.”

Even though Staab has a 3D printer is on campus, it is not open to everyone.  “The lab is not open to students that have not been trained to use the equipment in the lab — it’s not like the 3D printer is sitting in here by itself.”  explains Staab. “This 3D printer is not going to be open to all students across campus, but I’m excited that other people are excited about it.”