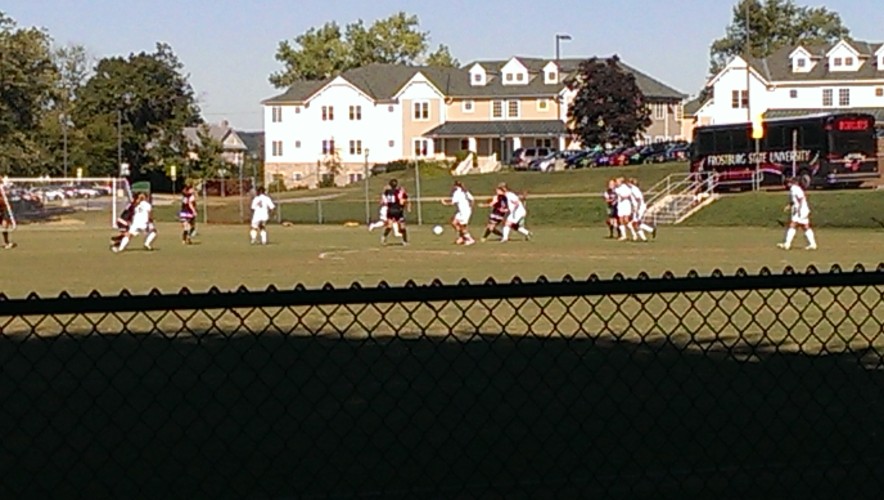 McDaniel Women’s Soccer faced off against Frostburg State University on September 17.  The Green Terror had not beaten Frostburg since 2005, and Tuesday’s game was an exciting victory for the team. Catherine Wroblewski started off the game bouncing the ball off  the goal and into the net just 27 minutes into the first half. The first half ended 1-0.

During the second half, 52 minutes into the game, Julia Pope made an impressive goal, shooting the ball with her left foot from the right corner of the box, where it sailed in the goal and the fans went wild. Less than two minutes later, Pope passed to Nicole Hill, who scored another goal. The score held 3-0 in favor of McDaniel until Stephanie Fazenbaker of Frostburg scored a goal with 7 minutes left. Goalie Hayley Jacobs had a great game with 10 saves.

Both teams nearly scored several times, and all of the girls played cohesively and aggressively. Leaders Meghan Sturgill and Maggie Quinn did not disappoint either, with Quinn consistently maneuvering around defenders to advance the ball towards the goal. The final score was 3-1.

When asked how she felt about the victory and game, Coach Lagana said she is “really proud of the team. It was a team performance. To beat one of the state schools was a big win.” Player Nicole Hill said the Green Terror “played so much better as a team. We have to keep it up.” Both the coach and Hill mentioned how the offense, midfield and defense played well. McDaniel’s victory against a rival as difficult as Frostburg marks the team’s determination, and shows hope of a good season. McDaniel Women’s Soccer plays next at Bryn Mawr at 1 pm on September 21. Good luck Terror!