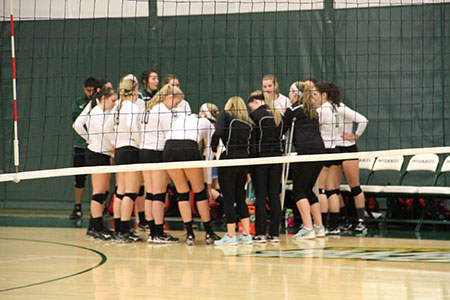 On October 29, the McDaniel Green Terror volleyball team took on the Johns Hopkins Blue Jays, in what has been historically always been one of their toughest match ups. The Blue Jays had a slightly smaller team, but their scrappiness proved to be a weapon they deployed later in the match.

For those new to volleyball, the teams play the best of five sets. It is usually the first team to reach 25 points that wins said set, but, in the occurrence of a close game, a team has to win by two points (for example: if the score was 24-24, on team would have to win by two).

The Green Terror brought out a starting lineup of underclassmen for both the first and second sets. It was bound to be a good game at the start of the night, seeing that the Green Terror was 18-9 overall and the Blue Jays were 15-10. In the first  set, McDaniel came out with an explosion of energy and took the lead, while Hopkins struggled with a string of service errors that inevitably caused them to take two time outs while they were behind.  After an egregious call by the ref against them that would of ended the set a few points sooner, the Terror still managed to take the first set 25-20.

The Blue Jays didn’t let the Terror celebrate for too long. They started the second set with a service ace (meaning they served a ball that the opposing team could not return), which proved to disbar the McDaniel defense, who struggled to return the following two serves as well. This proved to be a recurring theme for the home team, as they also battled to return more serves, dig hits, and overall scrambling on the court. The Terror seemed low energy until sophomore hitter, and co-captain, Madeline Rose unleashed a crushing hit to take the energy back up a notch. However, the Blue Jays never let up their tight coverage and smart ball play, and managed to take the second set 25-19.

After the half, the third set started with a kill from co-captain Kloe Martin, and started the Terror off on a good start. Although the home team seemed to struggle a bit with overpasses and non-returnable balls, they also let loose a barrage of great rallies and blocks to come back and meet the Blue Jays head on. It was neck and neck at 17.

It wasn’t more than a two point game that bounced between playing and time-outs: Hopkins time out at 20-18 with Terror in the lead, then two errors brought it to an even 20-20 and a McDaniel time out, then 22-20 Terror with a Blue Jay time out. The pace had picked up tremendously, and a complete brick wall block, a crushing hit, and a well-placed ball brought the Terror to pull out the third set at 25-23.

However, that seemed to be the last bit of steam the home team had. The fourth set was back and forth between points with lots of hustle from the Terror, but Johns Hopkins was not withholding any heat, which gave them a run for their money. They ended up succumbing to it, with the Jays taking the fourth set 25-19, as well as the fifth set 15-11 (fifth sets are only played to 15).

Talking with co-captain and Colorado native Kloe Martin after the game, she gave me her input: “We played well, we just don’t know how to finish, and I don’t know how to fix that.” She explained that they had to have beat Gettysburg, Hopkins, and Washington to go to the playoffs, but after losing to Gettysburg, their playoff hopes had been cut short. However, they are hopeful to make an appearance at the ECAC’s, or Eastern College Athletic Conferences.

She says humbly, “We were really excited about this year, but now we know next year not to be so cocky.”

In either case, the volleyball team, although extremely and heavily talented, is also young as well, with the majority of their players being sophomores. There is time and room for this team to grow and become seasoned together. Until then, fans and athletes alike anticipate a showing at the ECACs.