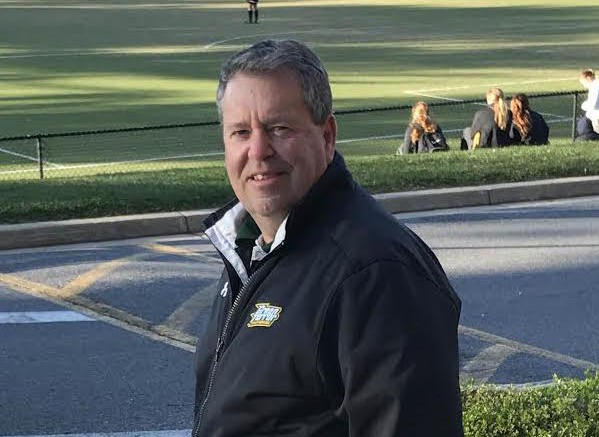 Life as an athletic director isn’t as easy as it appears.

At some point in every athlete’s life they consider being an athletic director. It looks like the perfect job, come to work and watch sports all day. Athletic Director Paul Moyer has been at McDaniel since July 2011, leading all of our athletic programs, and says the truth about the job is more complicated than the stereotypes.

Moyer started his journey in athletic administration after playing soccer and baseball in college. His first job was as a soccer coach and athletic administrator at Catholic University. He slowly worked his way up the ranks before coming the athletic director (AD) at St. Mary’s College of Maryland.

As athletic director, Moyer has to be the master of communication. The athletic department is the only department that deals with every other department on campus. Moyer is at the forefront of each of those interactions.

He acts with one goal in mind saying, “Everything I do relates to one thing, that is making sure our staff and our coaches get as much of the available resources we can get to assure that our students have a quality experience.”

While Moyer gets to attend most McDaniel athletic events, most of his day is spent handling a wide variety of issues. While working at St. Mary’s, Moyer received a check for $28,000 from the University of North Carolina. The check was intended for Mt. St. Mary’s College and while the money could have helped the college, he had to send it back.

Another example he discussed was an issue with a traveling track team. “I took a track to a conference championship; a total of 80 coaches and athletes. We were flying back to Chicago from Atlanta. A large convention caused traffic to back up and our track team was stuck on a highway 15 before the flight. I argued with the company that we had spent half a million dollars annually with this company. I managed to hold up that plane of about 15 minutes past its scheduled departure, until I saw our track team running toward the plane.”

Some of the issues he has dealt with have been more difficult. While AD at another college a bus of athletes traveling home from an away game was in a severe accident. One player who was a three-sport athlete was ejected from the bus. The young lady was paralyzed for life. Moyer said, “Calling her father was the hardest phone call of my life. I still get choked up thinking about it today.”

So why go through all of this daily stress? The answer is in the rewards. No matter if it is coaching or administration, nothing is better than seeing his athletes being successful in life. Moyer said, “We are doing this because we care about our students and their experience. When you see athletes who are stellar people, stellar athletes, stellar everything that come back and are successful, it’s awesome!”

Moyer recalled a former soccer player that played for him at Manhattenville College. The young man’s father moved his whole family from Ghana and worked four jobs to support his family. His oldest son came to play for Moyer and had a very successful career. But that wasn’t what Moyer was proud of, it was the fact that he earned his MBA and then paid for his siblings to attend college.

Moving into the future, Moyer has a clear vision in mind for McDaniel College, “I want to see us be competitive across the board in every aspect with the centennial. That doesn’t mean just wins and losses. That means in our facilities, our staffing and our overall experience for our student athletes.”