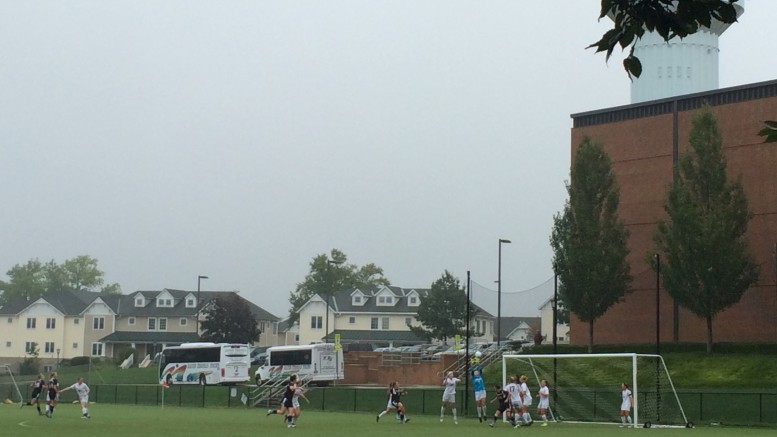 McDaniel goalie Sarah McDonald jumps to save a corner kick shot attempt against Ursinus on Saturday. Photo by Atticus Rice.

McDaniel Women’s Soccer earned their 9th win of the season on Saturday, maintaining their undefeated status with a 1-0 shutout in Centennial Conference action against the visiting Ursinus Bears at the Green Terror Soccer Complex.

The lone goal came late in the 84th minute off the foot of Christina Wroblewski. The senior found the back of the net past Bears goalie Courtney Sullivan for her fourth goal of the 2016 season.

Despite the gray skies and low score, game play out-matched the weather with a combined 21 shots on goal for the two teams, 12 for the Terror and nine for the Bears.

McDaniel goalie Sarah McDonald put up another outstanding performance in goal, saving all three shots that came her way during the entire 90 minute game.

Sullivan played on par with McDonald through 83 minutes, saving eight of the nine the Terror shot her way, the lone exception being the third shot off the foot of Wroblewski.

Forwards Kirsten Gibson and Katie Krischenmann added four and two shots on goal to Wroblewski’s three, but the single score was enough for their Conference-leading 9th win.

The Bears were led by Erin Farrell and Stephanie Donahue who each had two shots, one on goal.

Green Terror Head Coach Sandy Lagana, who led the team to a similar mid-season record last year, expressed no concern over the 0-0 tie late into the game, saying that she was confident that her team knew what they were doing and how they were going to get things done.

“If you worry about the record, you’re just prompting it to get broken,” Lagana said on the possibility of a loss or tie breaking her team’s perfect record.

In her fifth year with McDaniel, Lagana has full confidence that her team will always prevail in late-game situations like today and that they have the drive going into the second half of the season.

Women’s Soccer has eight scheduled games remaining with the possibility of an early season postponed game against Catholic to get rescheduled. Seven of the final games are against Centennial Conference opponents with key matches at Franklin & Marshall and Swarthmore coming back-to-back in mid-October.