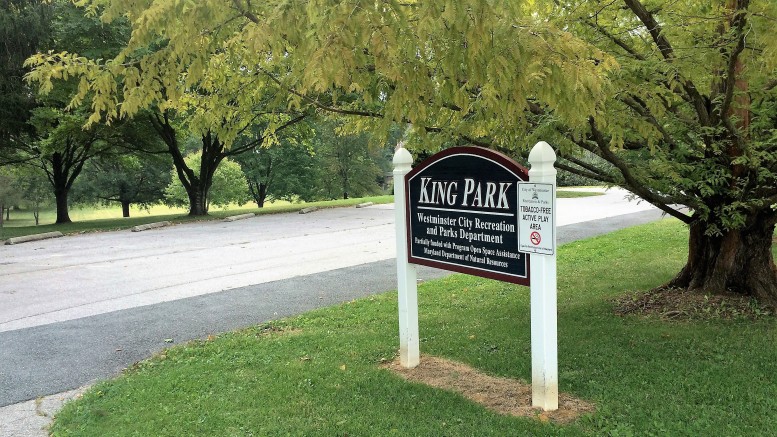 The entrance to King Park. Photo by Atticus Rice.

According to the City, the land currently in use as King Park was signed over to Westminster in 1980 by Grace K. Gher, Helen K. Hively, Elsie K. Bair, J. Phillip King, and Carl E. King. The proprietors gave up their land with the intention that it become the park that it is today, a dream that the City has never given up on.

Residents in the area have suggested improvements throughout the years to make the park more safe, accessible, and friendly. With significant help, the park received a face-lift to its playgrounds, sports areas, and play structures, as well as ADA-compliant equipment—a big step forward for an older park. The park is also a “Tobacco Free Active Play Area,” as dubbed by the City.

The improvements were made possible largely due to a $115,000 donation from Robin Ford Builders and another donation of $43,393 from Maryland’s Project Open Space Funding, a grant program from the Department of Natural Resources designed to help improve outdoor spaces. The City of Westminster and Carroll County also pitched in an additional $2,411 each. 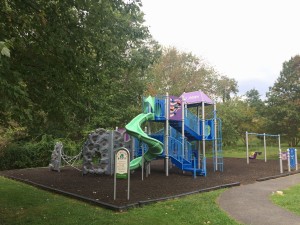 Today, the park can be seen in all its glory hosting dozens of people each day making use of the basketball court, horseshoe pit, playground, volleyball and tennis courts, and picnic pavilion, as well as the luscious grassy areas.

The basketball and tennis courts are situated in an open, visible area, allowing for all to be aware of their surroundings. Nearby, the ADA-accessible play structure can be seen, allowing for children and guardians to take part in separate activities at the same time, if they so desire. The picnic pavilion and volleyball courts sprawl across the remainder of the park, with ample parking available.

King Park’s facilities are just an easy, scenic three quarter-mile walk from Baker Memorial Chapel. From campus, head into town on Main St. and make a right at Kings Lane, followed by a left on Chase Street and another right into the park. If you’ve hit Anchor Street, you’ve gone too far. Use West Green Street or Union Alley for alternative routes. If you’re looking to spend some time at King Park, go for it!