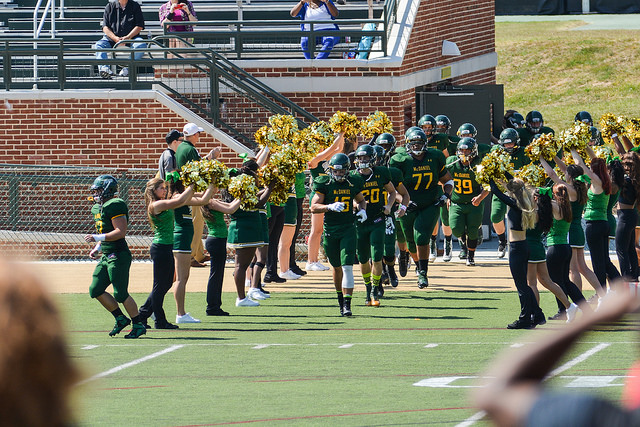 Athletic recruiting is rarely thought of from the coach’s perspective. Could you imagine talking to over 100 athletes and not having a single one commit to your institution? It has happened, and it will continue to happen. What it all comes down to is how well you can sell your school, your program, and yourself.

Here at McDaniel, a small Division III liberal arts college, there is a lot to offer, but coaches rarely know if it is what the athletes want. During the recruiting process there are many factors to consider: geographical location, distance from your family, academics, and campus lifestyle and involvement, as well as scholarship. All of these play a huge role in every athlete’s decision.

“One of the hardest difficulties of recruiting to McDaniel is that we are a non-scholarship school,” said Mike Dailey, McDaniel’s Head Football Coach. “I’ve coached at a school that offered scholarships and rarely would I have to recruit further than the fourth guy before receiving a commitment. Here at McDaniel I may have to recruit to the 10th or 11th guy.”

“Most student-athletes at the high school level have dreams, like all human beings, that they would like to be a scholarship athlete,” Dailey continued, “[and] finding them at a young age, where they are still hopeful that they will get an athletic scholarship, sometimes it is a little bit of a challenge to overcome.”

Melissa Jones, Head Coach of the Field Hockey Team, said she had difficulties trying to branch out into new areas of recruiting, but it is something she is getting better at. “We are a school who pulls the majority of our athletes from Maryland, New Jersey, Delaware, Virginia, and Pennsylvania, but we are starting to gain more interest from West Coast and Northeast athletes,” Coach Jones continued. “High school athletes [today] are more anti-social than athletes I’ve recruited in the past.” She added that they are more connected with social media and have issues calling back when she gives them a call.

When asked about the biggest problems with getting students admitted, Coach Dailey noted that because of McDaniel’s high academic standards, not just anyone could be admitted. “We are a higher academic school, we are not just going to take anyone with average grades,” Coach Dailey concluded.

When coaches were asked about what role financial aid played in recruiting, Coach Dailey said, “I think it’s a huge piece.” He explained that there are three components that should be important to the athlete: financial, academic, and athletic. “They have to fall in that order,” said Dailey, “Sometimes student athletes think that the third component should be first, when in actuality it is the third.”

Each team has different statistics when it comes to the number of students that commit. Tennis sits around a success rate of 30 to 40 percent, while football sits around 20 to 25 percent, and field hockey rounds out near 35 to 45 percent. These numbers are significant, but what is more important is why athletes decide not to commit, not getting enough money.

On the other hand, Coach Jones said that, in her 11th season, “The issue has never been recruiting, I just haven’t been able to figure out how to get them to stay.”

Coach Dailey added that, “You can over recruit a position, or you may have a number of guys on your board knowing that’s a position of need and no one come. The other portion of that is you may not want this to happen but maybe you recruit 10 guys and seven of them come when you really only needed three.”

As a current student athlete on the McDaniel Wrestling team, I was once on the athlete’s side of the recruiting process and understand the difficulties. I never understood what challenges coaches went through. I chose McDaniel after narrowing it down from lower Division I colleges to a few Division III schools. A few of the difficulties that these coaches faced are things that I am sure my coach faced while recruiting myself and others in my recruiting class.