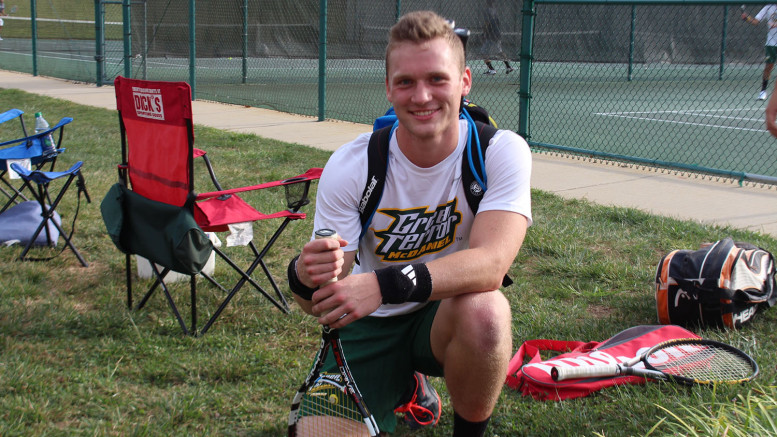 On September 20, McDaniel Green Terror Tennis hosted St. Mary’s (Md.), their first match of the Fall season. The sun was shining. The stands were packed. A light breeze passed over both crowd and players. It was a perfect day for tennis.

The teams lined up and the coaches made introductions. Players shook hands with their opponents and coaches. A spirit of sportsmanship and a love of the game filled the air. The teams had one final pep talk and then broke off to begin the matches.

At doubles, Corey Glocker and Andrew Kendrick led the team on the first court. The first three games went to the Seahawks but Glocker and Kendrick came back four games in an exhilarating turn around. The final set score was 8-4 in favor of the Seahawks.

In the second doubles match, Carter Trousdale and Matthew Diers joined forces for the first time in their college careers. It was a good combination but their opponents proved too formidable. Matthew “Pounds” Diers served an earth-shattering five aces over the course of the set. The final set score was 8-2. When asked how he felt about the match, Diers said he thought it “Was a strong start to a great partnership going into the spring season.”

The third set of doubles saw Tate Meyers and Logan Lindenmann playing together for the first time as well. Meyers had several excellent points but they ended up losing the set 8-2.

After all the doubles matches wrapped up, the players took a short break to refresh and rejuvenate. Some fans left and some new fans arrived.

Coach Nino Sujashvili said that “The team has a lot of potential but also a lot of room for improvement,” when asked about the outcome of the doubles matches.

In the first singles set, Corey Glocker faced off against Jonathan Gorel, playing a nail-biting first set of 4-6 and a rather quick second set of 1-6.

Next, Matthew Diers struggled against Robert Bishop in sets of 0-6, 2-6.

At fourth singles, Carter Trousdale, who was out all last week due to injury, playing Connor McKissick, dropped the first set 6-1. In the second set, he made a strong comeback at 3-0 only to sink the last six games for a second set score of 6-3.

“I don’t think it should affect any future matches and there’s nowhere to go but up from here on out,” said Trousdale when asked by his injury.

Nick Reed, a first-year, made his collegiate debut in the final singles match, losing to Jack Brandenburg 1-6, 2-6.

Overall, the matches were very lively and entertaining to watch. The fan base was strong with the spirit of the Green Terror and the applause was deafening and the cheers were music to the players’ ears.

In my opinion, I feel that tennis is a beautiful sport but it seems like McDaniel’s team has a long way to go until their season begins again in the Spring.

The Green Terror return to action at the ITA Regionals in Fredericksburg, Va. on October 1.

Where in Westminster: Baugher’s Orchard