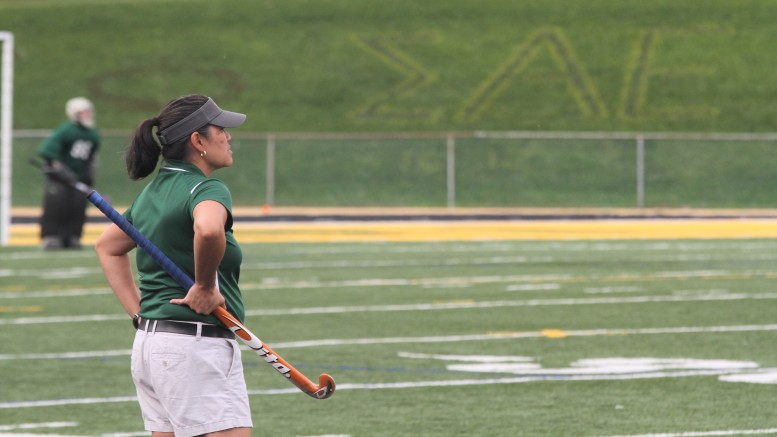 Field hockey head coach Melissa Jones on the sidelines during a 1-3 loss to Susquehanna on Sept. 13. Photo by Atticus Rice.

It’s no secret that tailgating at McDaniel is a big deal. The college claims fame to a 2011 Weather Channel ranking placing the college at number six in the nation for the football game-day festivities, and anyone around Gill Stadium during a home game can see the popup village that gets created for the day.

The bowl surrounding the field and free admission make the perfect conditions for those looking to take part in the near-2,000 person extravaganza. Football games are no doubt a community builder, bringing more people to the game than undergraduates at McDaniel.

The football program boasts a budget of over $100,000 and the largest roster in years of 122. But the team doesn’t receive any more funding than they should, according to Athletic Director Paul Moyer.

“We don’t really treat our teams differently,” says Moyer. “We give them more funding when they improve because they play more games.”

This is standard throughout the Centennial Conference. Make it to the playoffs and get more funding to play those games.

It’s been a while since the football team put up a record that warranted post-season play, but women’s soccer did it as recently as last year when they advanced to the third round of the NCAA tournament.

The team hosted the first two rounds at home, playing two extra home games. They then advanced to a single game at Brandeis in Massachusetts, racking up the bills along the way.

“For teams that go on into the playoffs,” says Moyer, “they’re going to get more money.”

And women’s soccer did.

“Zero-based budgeting is how we operate,” he says.

With this method, all teams and athletes are treated the same way. They get to manage their own money, which is divvied up based on the conference norms in their sport.

It really is. Athletics sets up a spreadsheet so they’ll know exactly how much each team will need all season to play their schedule without any hiccups. If teams want to take overnight trips here and there, it’s on them.

“It was great out-of-conference experience for them,” said Head Coach Melissa Jones. “[It was] something that is very costly but I pulled a little bit from here and there.”

Even if it would have cost more than Jones would have wanted, the experience alone justifies the spending.

“It worked out just fine. It was a great team bonding experience,” she said.

“They had a great trip. It was a great experience for the students, but we didn’t pay for all that. They raised money to pay for the overnight portion.”

“Our trip to Spain was amazing and definitely brought our team closer together,” says senior team captain Kristen Upton, a junior at the time of the trip.

“Those are pretty awesome experiences to be with your friends,” says Moyer. “I wish I could send the whole school for spring break.”

Outside of special trips, all teams operate with the same understanding. They’re given enough funding to play their games and if they need more, they ask for it.

“Honestly, I do not believe that I receive any less funding than what is truly needed to compete,” says Jones.

In her 12th year at the helm of McDaniel hockey, Jones is used to explaining how the financial operations work to recruits and their families.

“The flexibility comes in when teams are more successful. Clearly, when teams have more interest or participation, then the donations for that program go up,” he says, referencing the football program.

Despite the team’s records of the past few years, they draw crowds larger than any other sport and create a hype about the college. But that’s not all keeping football at McDaniel.

Even if teams aren’t doing well, the fact that the Centennial Conference lists them as a sport means that McDaniel will keep them.

“Do you decide [to keep a team] just because people watch it?” Moyer asks. “There’s not a million people watching golf games, but we have an amazing course and it’s a sponsored sport in the conference. For us, it makes a lot of sense to have golf.”

For now, football, golf, field hockey, and all the other McDaniel sports play on, all hoping to make it to the postseason with that guaranteed extra funding.

Thoughts from Coach Renner on the Upcoming Indoor Track Season