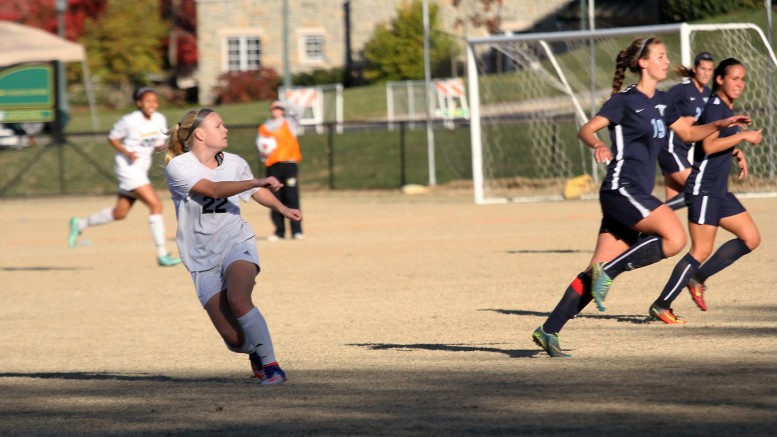 Kirsten Gibson looks to add to her team's score in McDaniel's 3-1 win over Connecticut on Sunday.

In their second NCAA Tournament game in as many days, McDaniel defeated the Connecticut College Camels 3-1 on their home pitch on Sunday afternoon. The Green Terror will advance to the sectional round of tournament play next Saturday to face off against Brandeis.

Sophomore Kirsten Gibson netted two second half goals for McDaniel, not even three minutes apart upon reentering the game after a sidelining injury.

Connecticut (10-6-2) scored their lone goal off the foot of sophomore Alex Baltazar in the 84th minute, bringing the score to the final 3-1.

McDaniel (18-2-1) controlled the ball for the majority of the game, yet took just one shot the entire first half. The Terror’s first half goal was awarded to the team after the Camels’ defense let a loose ball dribble in. The commotion came following a series of attempted shots by the hosts, resulting in a 1-0 lead at halftime.

Connecticut’s best chance to score in the first came with 10 minutes left when a corner kick hit McDaniel’s crossbar as goalie Sarah McDonald jumped up to block it.

Not even three minutes into the second half, Gibson went down on the field, resulting in an injury substitution. Just over ten minutes later in the 63rd minute, Gibson fired a shot off the right post, missing by mere inches.

Six minutes later Katie Kirschenmann found Gibson from the right who turned and fired a goal off the crossbar, into the netting to give McDaniel the 2-0 lead.

“My thing is to try to cut back and find that open shot,” Gibson said when talking about her first goal.

Two and half minutes after her first goal, Kirschnmann fed another ball through to Gibson who found the back of the net once again to put the Terror up 3-0.

“Katie did an excellent job working with me,” the sophomore said, “We always work well together.”

Connecticut’s goal would come nine minutes later, bringing the Camels within two. Junior Alex Bukovac found Baltazar at the top of the box who fired a shot through McDaniel’s defensive line for her 10th of the season.

“I wasn’t going to give up,” said Baltazar after the game, “My team has been here for me for every goal I’ve scored,” the sophomore continued. “I’m really proud of our team, we never gave up, even when it wasn’t going our way.”

Baltazar’s goal was the only one for the Camels, also playing in their second game in two days, as the Green Terror managed to gain control and shut out the offense for the remaining seven minutes of play.

“I think we’re well prepared to deal with the adversity we face,” said Kristen Upton, one of the team’s leading defensive stops, “I think we handled it really well,” the junior said proudly of her team.

Despite the strong offensive push, the Camels outshot the Terror 8-7, putting up three to McDaniel’s one in the first.  The visitor’s also had the edge on corners, 5-2.

Gibson’s two goals led the field, as did her three shots overall. Kirschenmann’s two assists were a team best, and her two shots came in just behind Gibson.

Baltazar led the Camels with six shots and her goal, followed by Mackenzie Kingston and Livi Block who each put up one try.

Connecticut Head Coach Norm Riker offered his thoughts after the game, saying that “McDaniel did a wonderful job on being aggressive, attacking, [they] knock the ball around well.”

Rightfully disappointed with the outcome, Riker thought that it could have gone either way. “It was a great battle, a great game, I thought the Camels played incredibly well,” the coach added.

With the second win at home this weekend in the Westminster Regional, McDaniel will advance to the section third round next Saturday to take on Brandeis.

“It’s just an amazing group of young women I get to coach day in and day out,” Lagana continued, “We’re ready to go on a trip and enjoy that new excitement,” hinting at the prospect of playing on the road next weekend.

Gibson agreed with Lagana, saying that the tournament was a great opportunity. “This is a thing we’re going to do every year now,” the game’s star said, “We’re just going to have to do our best.”

The time and location of McDaniel’s Nov. 19 game against Brandeis will be determined by a committee meeting on Monday afternoon and will be announced promptly.