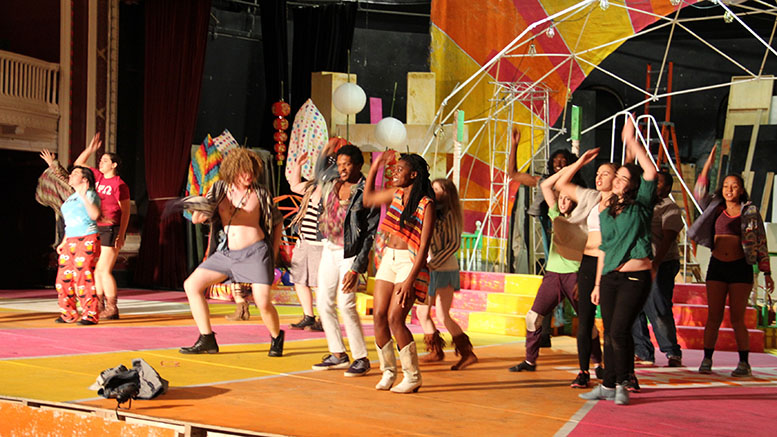 Cast members of "Hair!" rehearse for their upcoming performances. Photo by Casey Marson.

Looking for an escape from end-of-semester stress? The McDaniel Theater Company has just what you are looking for. Come out to McDaniel’s production of the rock musical, “Hair” this week for an enjoyable, fun, and interactive experience that will keep you amused and entertained like no other play you have ever seen.

The story of the play focuses on a tribe of hippies living in the Vietnam War era and what happens after their leader, Claude, is drafted to go overseas. You’ll get your fix of sex, drugs, and Rock N’ Roll in this playful musical. Several people around campus were unaware of this event happening so soon so be sure to spread the word and bring some friends!

Bryan Bowen, a junior in his first leading role in a musical, explains, “The play is about peace, love, and freedom. It’s a bunch of messages thrown into this storm of singing, dancing, protesting, and love. It’s an experience!” His excitement for his leading role and the impact that the play will have on the audience is inspiring. He went on to explain that he envisions the audience leaving the play feeling contemplative and provoked.

Megan Smith, a junior with three separate roles in the production says, “a huge theme of the play is playfulness, and, because of that, our set is modeled after a children’s playground!” She further explains that “the audience can expect to see everything ranging from giant balloons being tossed to them, merry-go-rounds and swings, and cast members running through their chairs asking people to dance with them.” Do not fear the interaction, but rather, embrace it. Smith finally encourages people to come enjoy the show saying, “this is certainly one of the most fun and interactive shows out there, we definitely recommend sitting up front!”

Brandon Richards, fellow junior playing the leading role of Claude, says that the audience “should be most excited for the craziness and unpredictability of the show. It is a show that is extremely different from every other one.”

Along with the fun and playful nature of the musical, Smith goes on to explain some important messages that can be taken away from the production. “The show’s themes of violence and divisions based on race and sexual orientation in our nation are very real, very relatable, and very scary. My biggest hope is for audience members to truly see and think about these things, as we cannot continually let our history repeat itself.”

Musicals and plays are great ways for people to experience arts and cultures in an interactive way. “Hair” offers an incredible spectacle for the audience and an amazing experience for the people involved. Senior Jen Shillingburg urges people to come see the show as she says, “To be onstage is to make art, and there’s nothing more wonderful about human existence than our capacity to create.”

Creativity and expression are two very important aspects of learning and growth. Whether it is your first show, or you’re a regular, “Hair” will offer you a fun, interactive, and thought provoking experience in which you can enjoy the art of human expression.

The show is scheduled to run between 2 and 2.5 hours and there will be plenty of concessions including soda, popcorn, and candy, provided by Alpha Psi Omega, the theater fraternity.

The play opens on Wednesday, November 16th at 7:30 p.m. in Alumni Hall on the main stage. The show will run from the 16th of November through the 19th. Each night, the doors will open at 7pm. Tickets are $8 for students, seniors, and veterans; $10 for the general public.

Theatre Prepares for First Show of the Year; Hairspray Promised to be a Hit