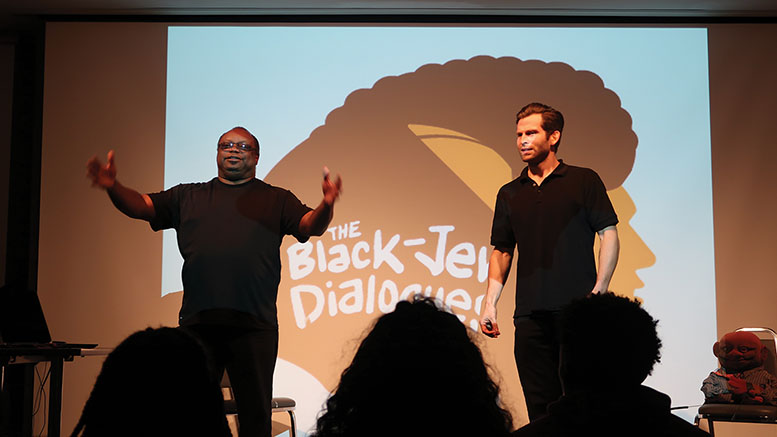 On Sept. 6 the Office of Student Diversity and Inclusion (OSDI) put on the Black-Jew Dialogues in order to acknowledge some of the different cultures that exist on our campus. The duo-scripted show featured comedians Larry Jay Tish and Ron Jones, one Jewish and the other black, as they discussed the similarities and differences between their two minority cultures in order to bridge the gap between their races.

The Black-Jew Dialogues is a comedy segment from “Dialogues on Diversity,” a social justice theater company founded by Tish and Jones in 2006. “We wanted to write a show about our cultures. We started out doing synagogues, colleges and high schools – and here we are, eleven years later!” states comedy actor Ron Jones.

The duo has since won numerous awards and now even works with younger actors such as Jeff Marcus, who performed at McDaniel’s show with Jones in place of Tish. These two have travelled across the globe speaking at various colleges and other organizations for years. In fact, they had to leave soon after their talk at McDaniel in order to catch a flight for their next presentation.

From acting as college students in a classroom to dressing up as grandmothers and discussing the impact of racial stereotypes on their families, the actors comically make bold or uncomfortable statements that address real life instances—yet their characters seem to always patch up in the end. For example, in one skit, the Jewish Marcus, used the n-word, which caused a stir within the McDaniel audience.

However, it sparked a conversation between the two characters about understanding why the n-word is offensive, and how to be more cognitive towards individuals moving forward. “It becomes personal and less comedic because it’s real now. It’s this new world that we’re living in. We try to instill things that are happening within the world because it is still evolving,” says actor Jeff Marcus.

The show ranged from funny to serious, as characters shared their racial history. Jones shared what it’s like to undergo scrutiny due to black male stereotypes, while Marcus spoke about the affects of the Holocaust on his people. “The message is universal,” Jones declared, “There’ll always be somebody who needs you to stand with them. Ultimately, if you’re not in charge of your own narrative, you will suffer or your narrative suffers. So, it’s up to all of us to look out for each other.”

The Black-Jew Dialogues is one of many ways that OSDI challenges students by establishing a space for conversation about relevant diversity issues, rather than forcing a conclusion or opinion on individuals.

As stated by OSDI director Jose Moreno,“I’m a firm believer that we, as a society and as a human race, really need to go deeper into learning about people’s backgrounds because we’re all different. If you don’t see who they are, then you don’t really get to experience that person or people. The more of our students see differences in people, the more they can appreciate it, hopefully. That’s the goal – to find an appreciation.”