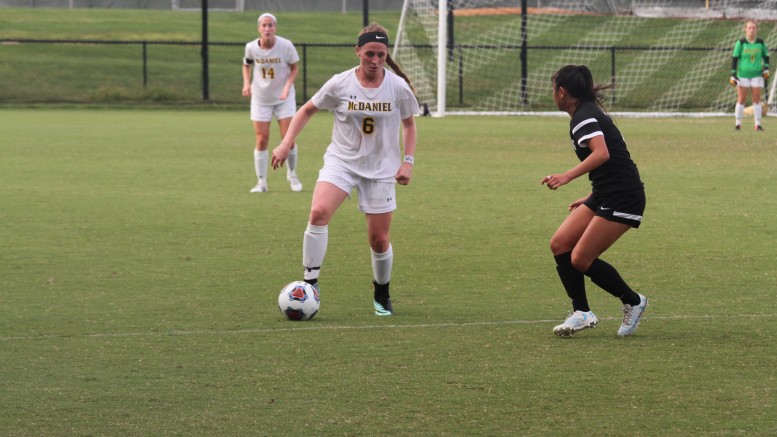 Farrell opened up the scoring for McDaniel (5-1, 1-0) with a goal in the seventh minute on a cross from Gibson to the center of the box.

“I couldn’t do it without my team,” said Farrell. “Kirsten [Gibson], Katie Kirschenmann, everybody up top, we were working really hard on finishing balls in the first half. I think we executed well.”

Gibson added onto her day’s haul with a goal of her own in the 22nd minute, her third of the season. She found the back of the net after following a deep ball from Kirschenmann down the right side before firing left.

“I’m happy, I hope I keep scoring,” said Gibson. “It was a great team effort today. I look to my team for that.”

Ursinus (0-5-1, 0-1) scored its lone goal at the end of the first half when Katie Bell found a misfired ball in the box, firing it past diving McDaniel goalie Sarah McDonald for her first goal of the season.

The opportunity came on a ball deflected off the McDaniel defense in a crowded box with the Ursinus offense pressing.

“We knew that [Ursinus] would be better probably than some of the other teams that we’ve been playing,” said head coach Sandy Lagana, “but I thought that we had a really strong first half. I think that letting in that goal certainly gave them a little bit more to play for in the second half.”

The Bears proved more dominant than McDaniel’s opponents of late but still struggled to penetrate the Green Terror defense which allowed its first goal since Sept. 1 on Saturday, ending a shutout streak of four games.

McDaniel outshot their hosts 16-7 and held the edge on corner kicks 7-4.

McDonald made three saves in goal for the Terror while Ursinus goalie Sabrina Doherty saved four of six attempts.

Ursinus’ first half goal gave them the upper edge for much of the second period, despite putting up just four shots.

“[The] second half wasn’t exactly what we wanted,” said Lagana, “but I think if we can get out of the game, maybe not playing our best, with a win, we’ll accept it and look to Monday to be better.”

“Second half,” said Farrell, “was a little more kicking and going, but pulling out a win in our conference was a good feeling.”

After finishing non-conference play at 4-1, McDaniel now sits atop the conference at 1-0 with a challenging schedule ahead.

“Going into the conference,” said Gibson, “it felt good to have those wins.”

“We were really excited opening up the conference,” said Farrell. “It was a big weekend for us and we wanted to show everyone in the conference what we are.

McDaniel hasn’t lost in 16 days and the team doesn’t have any plans for that to change.

“I know [Gettysburg] is always a big rival of ours but I think we’re ready for them, especially now that we’re 1-0,” said Farrell.

“I think each team from here on gets better,” said Lagana. “I think Gettysburg is a little stronger than Ursinus and I think Swarthmore is stronger than Gettysburg so it’s a nice build-up for the team. We always want to play the best teams so I think this is the part of the year that we look forward to the most.

“We just have to keep up the intensity and keep that winning streak going,” said Gibson.

Gunnar Ward contributed to this story.