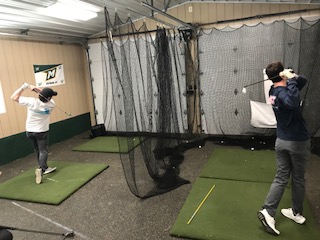 Five years ago, the McDaniel men’s golf team peaked with a trip to the Division III National Championships. Since then, they haven’t been able to make it back. This season, however, they look to return to the most prestigious stage in DIII golf.

With a new assistant coach, two-time all-American Corey Haas, the team appears ready to roll for another shot at a national championship.

The team is additionally poised for a good year after bringing in six first year students. After losing only two seniors last year, there are many wondering if these first years can perform.

“We all had one goal at the start of the year and that was to get back to the national championships,” said head coach Scott Moyer.

In the fall season, the team won two tournaments.

“We had a lot of momentum coming off the fall season into this [spring] season and I feel really confident in our boys,” Moyer said.

With 11 players, there isn’t room for errors when it comes to making the starting lineup.

“We have a lot of good guys and young talent in the freshmen this year and we all put in 100 percent at practice to try and get better and beat each other out to get in the tournaments,” said senior captain Brandon Vance.

With only a few tournaments remaining and the spring season just beginning, the players and coaches know it will be a grind from here on out to get where they want to be.

“Coming here was a great decision,” freshman Charlie Csejka said. “I like it a lot and we are all a group of guys who are close off the course. But on the course, we knot it’s a battle and we have to try and beat and push the guy in front of us to get where we need to be.”

Moyer spent time heavily recruiting this past summer to get the new class.

“I knew we were only losing two players and I brought in six kids who I fell can help us get to where we need to be and that’s getting to another national championship,” he said.

The players and coaching staff have a lot of confidence in their freshman class entering this upcoming season after the performance by them in the fall. They are also led by Vance who feels he and his team can make a run this spring.

“In my last season here, I really want to make a run for nationals and with this group of guys and all the talent we have I see that being possible,” Vance said.

With the first tournament just a few weeks away in South Carolina, the team has been back in action practicing indoors to get ready for what the spring season has in store.

“Going to the national championship is an unreal experience and would be one of, if not the best, times of these boys’ lives,” Moyer said. “Winning our conference to get an automatic bid to go there will be a great way to make a statement for our upcoming years and knowing we are able to get there.”