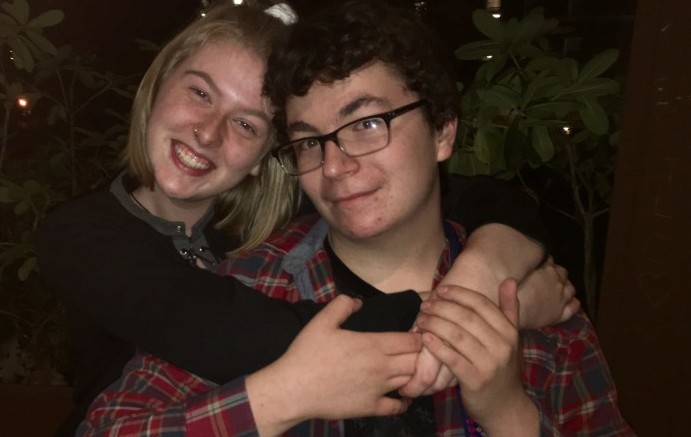 Gunnerson and Fine on a Thursday Night. Photo by Gunnar Ward.

Every Thursday night a crowd of close to 45 students surrounds two musicians in the Gazebo. Simultaneously, a brisk autumn wind dashes by, snatching up a blend of laughter, singing and instruments. While the wind may carry these sounds across the Hill, it leaves a smiling audience and two satisfied musicians named Jake Fine and Rachel Gunnerson.

The musical duo of Fine and Gunnerson has served as McDaniel’s Thursday night attraction as students of all years are drawn to the light atop the gazebo that sits quietly in the triangle of Hill Hall, Whiteford, and McDaniel Hall.

“I wanted to take a more active role in making music and spreading joy,” Fine said. “Experiencing live music and understanding the joy of music that is physically in front of you, I wanted to help others experience that.”

Although music is a passion for both Gunnerson and Fine, it was not what brought them together initially. Like many incoming students, social media was their first connection. This is especially critical seeing that Fine is from Lambertville, New Jersey and Gunnerson is from Portland, Oregon.

Despite this distance, both Fine and Gunnerson fell in love with music long before they arrived at McDaniel.

“I tried taking lessons as a kid, but it never really worked out,” Fine said, “Then I found a lot of self-motivation in 9th or 10th grade and I started playing drums, piano and guitar at the same time.”

With this newfound motivation for music, Fine has continued to teach himself more and more as he says he is 90 percent self-taught.

On the opposite side of the spectrum, Gunnerson handles most of the songwriting and vocals.

“I have always sung since I was a kid, and I started writing songs at 8 years old,” Gunnerson stated.

With Fine handling the instrumental aspect of the music and Gunnerson taking the lead with writing and vocals, the two make a dynamic duo. However, they have considered adding other elements to their group. Both said they have been experimenting with other genres of music including jazz and rock, and they have even considered featuring another musician. However, because the two work so well together, some fans are hesitant to see additional artists added to the mix.

“They work way too good [sic] together,” Fine’s roommate and friend Gus Gibbons said, “They don’t need another person.”

The duo has already notched quite a few performances, as they have wasted no time in playing their first song starting their first or second week since arriving on the Hill.

“We loved our friend, Q [Combington] so much that we decided to write a song about him, Gunnerson said, “We told Q and five of our friends to come to the gazebo and we sang it and [decided] to do it more.”

Since this original song, a newly written piece of music has been performed every Thursday at 10 p.m. in the Gazebo. Over time, their fan base has grown significantly. With more and more faces coming to see the duo of Gunnerson and Fine, their presence has not gone unnoticed.

“It’s been really weird to hear people be like ‘Oh you’re the ones that do Gazebo’,” Gunnerson said, “It’s really cool that people are talking about it.”

With support coming from many different students, the musical duo continues to set their goals high – an album featuring previously written songs and new material may soon be in the works.

Both Gunnerson and Fine agreed that if a donation jar was opened it would be for the purpose of growing their music, funding merchandise to give away, or donating to a charity.

With the possibility of taking their music to another level, fans of Gunnerson and Fine are willing to help.

“I’d help them produce it any day,” said Jill Courtney, a friend and fan of the duo.

Music is the root of the happiness that Gunnerson and Fine share with their fans. As each Thursday approaches, the duo longs to capture an opportunity to bring McDaniel students together in order to share the unique joy that is provided by live music. With the cool winds of autumn soon transitioning into winter’s whip, it may blow the group indoors, but their goal will remain the same: to take the happiness of live music and, like the wind, spread it far and wide across McDaniel’s campus.

The Great Gatsby, reimagined in Reed’s Tell Me My Name