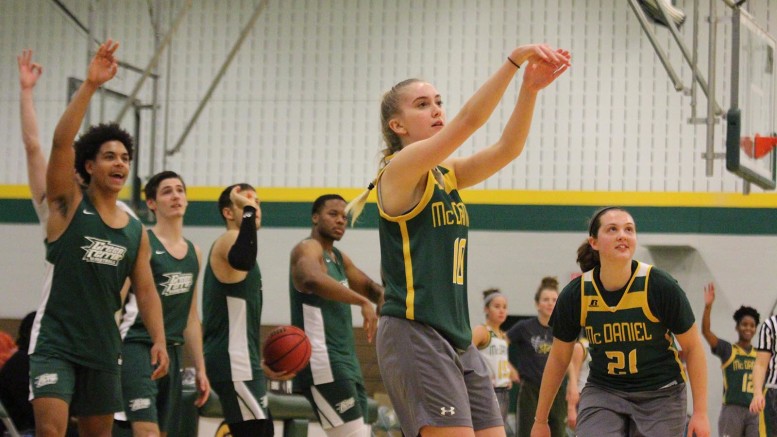 The men’s and women’s basketball teams came together to host Midnight Madness on Thursday night. The fun and energetic event kicked off the upcoming season and was an opportunity to rally the student body.

Midnight Madness is designed with the goal of having fun, but it is also an opportunity for both men’s and women’s basketball to showcase their skills. The display of talent is reflected by the drive the teams have as they pursue the upcoming season’s goals.

“We are looking to make the Centennial Conference playoffs,” Men’s Basketball Head Coach Kevin Curley said. “We plan on reaching it by working hard in practice to try and get better as a tough physical and defensive team.”

Last season, the men’s basketball team finished with a 6-19 record and looks to rebound this season.

Midnight Madness featured the women’s basketball team as well. Last season, the team finished with a record of 12-13, but were on the 500 percent winning mark in conference play with a record of 10-10. The team looks to continue to strive and improve on that mark.

Kicking off the season, the women’s basketball team will take to the floor for the first time since 1981 without former head coach Becky Martin on the sideline. Martin took a medical leave of absence following a diagnosis of stage 4 pancreatic cancer earlier this year.

“It has been hard for a lot of us,” sophomore forward Hannah Zajac said, “but we have adjusted well and we’re excited for this year.”

Since then, Rick Little has been named interim head coach to the women’s team. Little is a former assistant coach for the Green Terror, but said he is up for the challenge of taking on the head coaching mantle.

“There is no replacing Coach Martin,” Little said. “We are trying to build on what she would have done and make a positive experience for the girls.”

With the season heading into full swing, the women’s basketball team took a dominant win this weekend against Wesley College 72-55. The men’s season will start at home on Monday, Nov. 12 as they host Southern Virginia University in the Gill Center at 7:30 p.m.

Midnight Madness was the rally to welcome in the 2018-2019 season for the teams and was driven by a significant crowd and high energy. It is moments like this that reminded players of the reasons they love basketball.

“Basketball is a lifestyle,” Zajac said. “Ball is life.”

Nearly packing the gym, students in attendance were brought onto the floor to join the players and compete in a variety of games. Ultimately, the support of the student body strengthened the community on the Hill.

“It is amazing to know and see that we have support from fans, students, and the members of the community that are going to be backing us every step of the way this season,” Women’s Basketball Team Manager Rachel Pigott said. “It means so much for the team.”

From the players’ perspective, taking the floor in a roaring gymnasium to start the season is one that serves as a segue into the intense season that is coming up.

Freshman guard Madeline Thompson summed up her experience on Thursday.