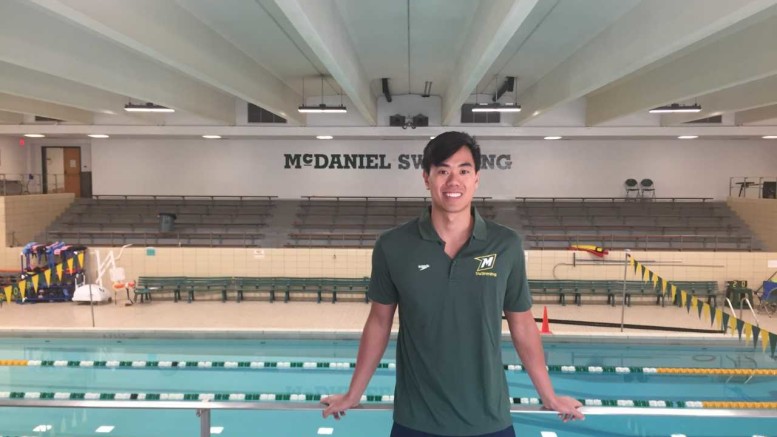 Have you ever wanted to meet an Australian? Well, you’re in luck, because Eugene Tee, McDaniel’s assistant swimming coach, is from Australia!

Tee was born and raised in Melbourne, Victoria in the southern part of the country.

He moved to the U.S. in November of 2010, but made the decision to study abroad at a young age.

“I made the decision to leave my family and friends at the age of 16 to pursue opportunities in the U.S.,” Tee said. “Two of my teammates and I decided to follow our swim coach to Santa Monica, California to continue our training and then transition into the NCAA. The opportunity of collegiate athletics does not exist in Australia, the possibility of earning a world-class education and training with elite amateur athletes via scholarship seemed too good to pass up.”

Tee’s interest in both swimming and coaching led him to McDaniel.

“With swimming being such a significant factor of my life for so long, I’ve always been curious to see the coaching aspect of the sport,” Tee said.  “After graduating in 2017, the opportunity arose where I could be the graduate assistant swim coach at McDaniel College while I get my master’s in kinesiology and living expenses taken care of.”

Tee naturally had fears about living in a new country.  However, the transition to life in the U.S. was not rooted in cultural differences, but rather an interior sense of fear.

“I would say my biggest fear about making the move was ‘what if I didn’t do good enough’ or if the transition was a ‘failure’ in some sense,” Tee said.

The drive to find success as an athlete and coach has been successful for Tee. However, it was not without a certain risk. One could claim the situation to be high risk and high reward for Tee.

“In the sport of college swimming back then, coaches can’t contact you until the first of July leading into your senior year. Since I moved at 16, I moved halfway across the world with no guarantee of a scholarship,” Tee said. “I knew I had to challenge myself daily to go to the best possible academic and athletic program that would make my family proud.”

Additionally, there were obstacles that Tee faced when adjusting to life in America.

“Besides everyone around me talking in a weird American accent and driving on the other side of the road, one of the biggest obstacles I faced and still do, is trying to establish a support network,” Tee said. “Especially leaving my family and friends at a young age, I knew I had to do my best to surround myself with like-minded individuals in order to be successful. Whether this be academically, athletically, or socially, trying to find a group of people with the same goals and ambition has always been important to me.”

“I actually have not met a lot of other international students here at McDaniel. I know there are two soccer coaches from the U.K., one of my swimmers is from Guatemala, and a women’s basketball player from Australia but other than that, not really,” Tee said.  “For the sense of belonging and community that McDaniel manages to cultivate, I am a little surprised.”

“I’ve enjoyed my experience here so far. I’m always up for a challenge and putting myself in new environments, and this has definitely been one of them,” Tee said. “Doing my undergrad at a slightly larger university like the University of North Carolina at Chapel Hill where the undergrad population was around 17,000 [and transitioning] to a place where the undergrad population is a little over 1,700 has been one adjustment for me.”

Tee became interested in swimming from a young age.  However, Tee only started taking swimming seriously when he was a teenager.

“Learning how to swim in Australia is a pretty common skill. With most major cities located on the coast, there’s a big push from the government for everyone to [be] water competent,” Tee said. “I only really started taking swimming seriously around the age of 13 when I had an American coach, Dave Kelsheimer, take over the club team I was at. Before that, I was only swimming a few times a week for a few months of the year just for fun.”

Tee’s interest in coaching comes from an appreciation of the various techniques that encompass success in sports.

“I guess for me I’ve always had an interest in the way an athlete trains and the techniques they use to get better,” Tee said. “Especially in the sport of swimming where you have people who specialize in different strokes over different distances, there are so many different training philosophies to reach the same end goal.”

Tee, a former student-athlete in North Carolina, took the high student population as an opportunity to further his understanding of the movement of athletics. The value of the technique will always outwork physical characteristics.

Tee also stated that he has enjoyed his time coaching at McDaniel and that he has learned a lot about coaching from Head Coach Jeff Hiestand.

“I’ve really enjoyed my time coaching at McDaniel so far. I knew I had a decent background in swimming, but not so much on the coaching aspect of the sport,” Tee said. “Head coach Jeff Hiestand has been a great mentor to me as he’s been able to pass along a lot of his knowledge, whether it be during his time as a club coach sending swimmers to Division I Power-5 schools or during college training Division III All-Americans.”

McDaniel is recognized as one of the colleges that can change lives and that is applicable to Tee.

“I think I’ve learned a lot about myself during my time at McDaniel so far. Being given the opportunity to be the graduate assistant has definitely allowed me to develop new skills in areas I hadn’t previously,” Tee said. “Whether this is through becoming a better communicator or teacher through coaching and recruiting, the knowledge and experience I have gained will be valuable for my future ambitions.”