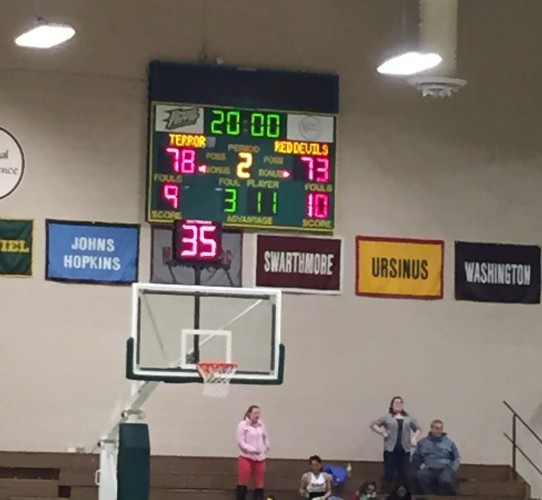 The scoreboard during the game against Dickinson.

In what equated to their most important game of year, the McDaniel Green Terror upset the #9 ranked Dickinson Red Devils behind a season-high 25-point effort from senior guard Andrew Merlo in front of a ruckus crowd at Gill Gymnasium on Wednesday.

The student section, which filled the arena to near capacity, was spread out throughout the gym, as opposed to being behind the basket, for the first time all season. Due to the crowd, extra faculty members were in place to prevent a potential court storm and curtail the use of abrasive language, which the Centennial Conference is attempting to crack down on.

Dickinson, paced by 29 points from senior preseason All-American Gerry Wixted and 22 points from junior Brandon Angradi, dropped their second contest in a row, falling to 18-4 (11-4) and a tie for second place in the conference ahead of Saturday’s match-up against top-ranked Johns Hopkins (20-2/14-1).

Dickinson would not cut the lead to less than 4 in the first half, thanks in part to Cam Royster’s three and-1s and 10 total points, the last of which he tipped in right before the horn sounded.

The beginning of the second half offered more of the same for the Terror, as Tim Stewart, Phil Perry and Merlo all made layups to push the lead to 13 before the Devils counterpunched, going on a 13-0 run in a span of less than less than 3 minutes to cut the lead to 50-49.

A Wixted and-1 and a quick Angradi 3 pointer gave Dickinson the lead at 60-58, which would be stretched by a Chris Cox free throw to 61-58. This however, would be the last lead for the #9 team in the country.

Two Phil Perry layups bookended back-to-back 3 pointers by junior Wes Brooks, quickly pushed the Terror ahead to 68-61, and turned the game into a free throw contest, which Perry capped with 6.3 seconds left by hitting two free throws to seal the game at 78-73.

The Terror, with three games left in their season, can essentially lock up a bid in the Conference Tournament with a win on Saturday at Swarthmore. Senior night will follow at 8pm at Gil Gymnasium against #10 Johns Hopkins on Wednesday, Feb. 18, with the regular season finale coming on Saturday, Feb. 21 at Gettysburg.