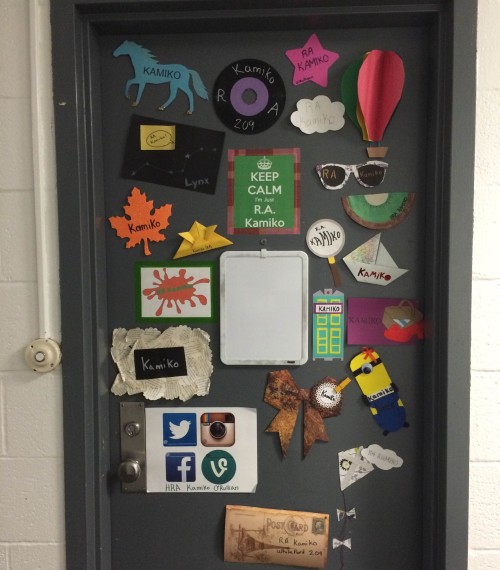 Resident Assistants have a reputation on campus as goody-two-shoes and snitches; however, this is not how they should be viewed.

Each resident, holding on to his or her opinion, differs depending on the dorm, the R.A.s personality, and their class year.

“I think they are very great, influential, people to go to when you need something or whenever you need someone to talk to it is always confidential because of the bond we share,” says senior Caroline Brehm.

The residents’ perceptions of their R.A.s change drastically over the course of their four years; those opinions differ from class to class and year to year. The change creates a sense of growth not only among the residents themselves but also the school as a whole.

“I’m sure if they had to tell on you they have a reason for it and they are just doing their job,” said first year student Perry Stefanelli. First year student Maurice Hargrave feels as though they tell on them for anything and everything, “we are college students and [we] are supposed to have fun”.

College residents’ trust of their R.As is crucial to the discipline and respect received on each floor of every dorm. The ability to talk to the Resident Assistant is what every resident seeks but sadly it isn’t always offered.

Residents across campus have their own set opinions and perceptions of R.As as authority figures. This creates a misunderstanding to the Residents Assistants as being seen as snitches who look for trouble through their halls. They may be tough, but are they really bad people or just competent Resident Assistants?

Junior R.A. Kamiko O’Rullian says that the best way to be a good R.A. is to make an effort to interact with the residents by “creating a community” among them.

R.A.s bring their residents together through clever and personally time consuming activities that can be fun and help establish friendships. During the activities, trust is built not only between floor-mates, but between the residents and their R.A.s. Some residents seem to expect that their close relationship with the R.A. will allow that their shenanigans go unpunished.

Aside from having housing and food paid for by the college, sophomore R.A. Jeb Shingler expresses the rewarding feeling he has of being there for his residents. He went on to say, “R.A.s are there to do a job and [the] role that they play is to enforce the rules and policies and with that, some may view us snitches.”

Of the 33 Resident Assistants here at McDaniel, not one believes their goal is to snitch or get people in trouble, but to report inappropriate behavior taking place within the residence halls.

Being a snitch isn’t what being an R.A.s all about, but if it has to be done to ensure the safety of the residents, it will be done.

Quotes have been edited for clarity.