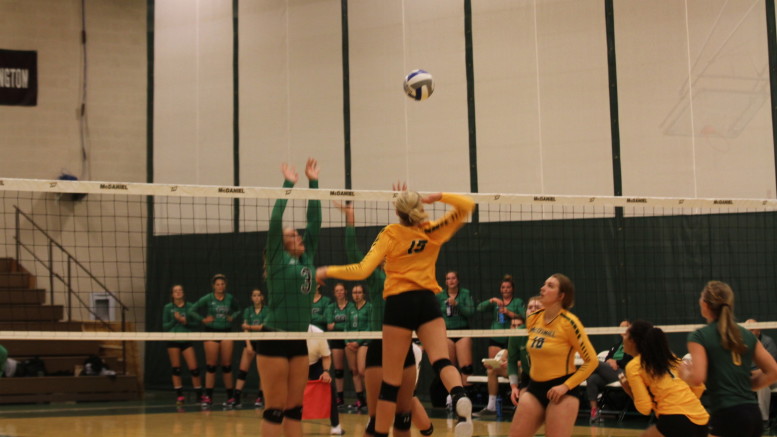 Emma Lorenzen at the net for the Terror in their 3-1 win over York on Wednesday. Photo by Atticus Rice.

McDaniel Volleyball defended home court for the first time this season against the York Spartans winning in four sets on Wednesday evening.

With the win against York, McDaniel (4-1) drives to a three game win streak and halts York’s undefeated streak leaving them with a dented record of (4-1).

Marlowe Embry continued to impress as she led the Green Terror in kills for the second consecutive game tallying 20 in the win against York. Teammate Emma Lorenzen contributed 14 of her own.

Like any competition, teamwork is a necessity for victory and Embry and her team recognize it.

On the defensive side of the net, Isabel Paci led the team with four blocks and junior captain Taylor Bauman with 26 digs. Both McDaniel and York finished with seven blocks.

The contest between the Green Terror and Spartans was one of constant action with McDaniel winning the first two sets before falling short after a series of one-ups in the third. Heading into the fourth set, McDaniel rebounded after the loss to finish the Spartans.

Leading the Spartans in kills was Cheyenne Atland with nine and following shortly behind were Brooke Krebs, Madyson Whitcomb, and Hannah Siaurusatis who had eight each.

“I’m glad we won, but there is always room for improvement,”  said Embry.

With a focus on improvement, McDaniel volleyball looks to continue their win streak against St. Mary’s (0-4) on Friday at 7 p.m. while defending the home court once again with teamwork as a central focus.

“We want to play better, get the next win and work as a team,” Embry concluded.