Baltimore, Md. It is the home of the Orioles and now, the home of playoff baseball. Going to the first game of the American League Division Series was absolutely awesome. I had the time of my life.

To be an Orioles fan, one must be a strong-willed individual. You have suffered through a multitude of losing seasons, all of the bad signings and trades. Then, you saw a glimmer of hope at the end of 2011 when Robert Andino picked up a walk-off hit from then Red Sox closer Jonathan Papelbon.

The Orioles winning ways have turned the entire city orange and the beauty of it is that so many people have bonded together over their O’s. As I drove to the light rail in Landsdowne, I could see so many people in Orioles orange. Cars had flags, people had hats on and I even saw a dog wearing a jersey.

Getting to the game from the light rail, the excitement was absolutely intense. A great cheer of excitement from the fans came from around the Baltimore Convention Center as they made their way to the park.

I waited outside of Camden Yards for an hour and a half to get into the stadium. That time was very interesting. The Tigers fans started to show up to the stadium. Tigers fans were welcomed by Orioles fans in the stadium. Baltimore seemed to be ecstatic just to have a winner after 14 years of losing before 2012. Now, the Orioles are the AL East Champions. 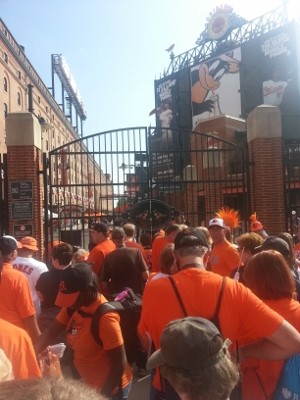 A sea of Orioles orange at Camden Yards. Photo by Kyle Andrews.

When the stadium’s gates opened, a sea of orange flooded into Camden Yards. I received a playoff towel from the usher and I went on my way to watch batting practice. It was great to see my friend Matt Kammer, another junior from McDaniel, who happens to be an usher at the stadium. We took a couple pictures and then I went to my seat.

As I got to my seat, I was alone in my row. I had a seat in the nosebleeds, section 378, row 17, seat 17. At that time, I saw that my friend from high school had taken a picture and his seat wasn’t too far from mine. He came over, we chatted and he went back to his seat. The other fans in my row started to show up. Then, my row was completely filled.

When talking to one of the fans, I realized that she wasn’t American. She was Australian. She had come all of the way from Australia to view the game at Camden Yards. To see the Orioles fan base reach all of the way out to Australia was insane.

The Orioles battled with the Tigers until the bottom of the eighth inning. In that inning alone, the Orioles increased their lead from 4-3 to 12-3. The Orioles obliterated the Tigers bullpen. Fans cheered so hard that the woman from Australia actually spilled beer on the gentleman sitting next to me. All was forgiven because the Orioles ended up winning 12-3.

I loved that I got to see an Orioles playoff win in person for the second time in my life. It was beautiful. I have loved the Orioles since I was a young child who was born in Norfolk, VA. To see this win changed my outlook on the Orioles. I went from thinking, the Orioles will make a deep run in the playoffs to saying, “I believe that the Baltimore Orioles will win the World Series.”