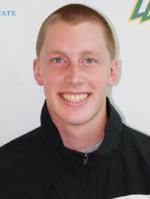 Humid air, thick with the pungent odor of chlorine filled the aquatics center at Washington College in Chestertown, MD on Feb. 9. Freshman McDaniel swimmer Bradley Brooks shook his competitors hands as they took to the block. Little did they know this would be the closest they’d get to Brooks until the end of this 1000-yard freestyle event.

“It’s so exciting to watch him swim,” senior teammate Jonathan Leafblad said, “I’ve never trained with such a dominant athlete.”

After the first 25 yards, Brooks held the lead by almost a whole body length. As he approached 175 yards, he held a half-pool lead on his competitors. Brooks lapped a swimmer after 475 yards, maintained his outstanding lead, and finished with a time of 9:34.46, 0.05 seconds off from the Centennial Conference record that he previously held.

The Green Terror freshman dangled from the staring block, as he waited for his competitors to finish their last few lengths. Second place finished 36 seconds later – a blowout as usual.

Consistent success hasn’t made Brooks cocky, but instead more determined to excel his teammates to the same performance level.

“He’s a hard worker and he wins. A lot,” said junior swimmer Elyse Hyle, “He’s modest, but because he’s so determined it makes us all try to work just as hard.”

During his short time at McDaniel thus far, Brooks has shattered six individual, three relay, and two conference records. Despite all of this, his team means more to him than his personal accomplishments.

“He’s all about team,” said Head Coach Jeff Hiestand, “During the first workout of the season I ask the swimmers to set a goal for the season and most swimmers describe a personal goal like improving their own time, but Brad said that he wanted to lead a team of four to compete in the national championships.”

Brooks says that his competition was always tough growing up. He began swimming at age four in his hometown of Newark, Del., at his neighborhood pool, the Persimmon Creek Swim Club.

He began with lessons, team competitions, and the aquatics team at his high school, The Charter School of Wilmington. He also swam for a year-round club team; he returns there in the summer to stay in peak physical shape.

After compiling an impressive set of lap times and honing his skills in the pool, a number of Division III schools and a few Division I teams became interested in Brooks.

He knew he wanted the close-knit feel provided by Division III athletics, but finally settled his focus on McDaniel. A former pool manager at Persimmon Creek was an alumni of Western Maryland College, and recommended that Brooks take a trip to Westminster.

“I loved the atmosphere on the Hill. I immediately took a liking to Coach Hiestand after our first bit of contact,” said Brooks, also noting that the teammates he first met helped to seal the deal.

Brooks noted that competitive swimming is unique because it fosters a close-knit feel amongst teammates. Brooks says that he lost motivation for the sport during high school because of a team where he wasn’t really enjoying himself. As a Green Terror swimmer, Brooks says he actually likes coming to workouts now.

“Coming to McDaniel rekindled my passion for swimming, and I’m grateful for that,” Brooks said.

Hiestand believes that Brooks has been an invaluable addition to the swimming program here at the college, especially since its roster size has been shrinking.

“The team looks up to him as a leader,” Hiestand said, “He’s great, he never misses a workout or practice. He puts forth 100 percent all the time, but still knows how to crack a joke.”

During the regular season, Brooks shattered the conference records for the 1000-yard freestyle and the 400-yard individual medley, and became the third fastest swimmer of the 1000-yard free in all of Division III.

Record-breaking athletes must commit themselves to a stringent training regimen. In a typical week in the heart of the season, the team generally has three morning practices, five afternoon practices, two hour-long “dry-land” workouts involving cardiovascular and endurance training, and two 45-minute cardio workouts. In addition to this, Brooks aims to fit in one distance run a week and some stair running at the stadium on the weekends.

All that exercise demands proper nutrition; just recall to Michael Phelps’ famous 12,000 calorie-a-day diet that made the news during the peak of his performance.

“It’s important to stay fed,” Brooks said, “I usually try to aim for four or five plates at Glar whenever I go.”

The McDaniel men’s swimming team finished off the regular season with a 2-8 record and the team is proud of their performance nonetheless. Leafblad, Brooks, and other teammates share positive outlooks on the current status and future of the program.

Throughout Brooks’ first-year experience at McDaniel he noticed that campus awareness of the swimming program is a bit lower than he’d like. He hoped that with outstanding performances he and his team might be able to pack the stands for every home meet.

“Our team hasn’t been historically dominant within the conference,” Brooks said, “but with recent improvements, McDaniel’s swim program can make it to that next level.”

Junior teammate Stevie Hoyt shared a similar opinion: “The growth just from last year until now has been incredible and I don’t see it going anywhere but up from here. As we get better and better we will attract more attention to the school, bringing better recruits. I think men’s swimming here has a bright future.”

For his impressive performance at the championship meet Brooks earned both the Outstanding Performer and Outstanding Rookie Awards – he is the first McDaniel swimmer to do so.

Brooks now looks towards the NCAA Division III Championship meet that will be held in Shenandoah, Texas. Selections for this competition are to be announced on Feb. 27.