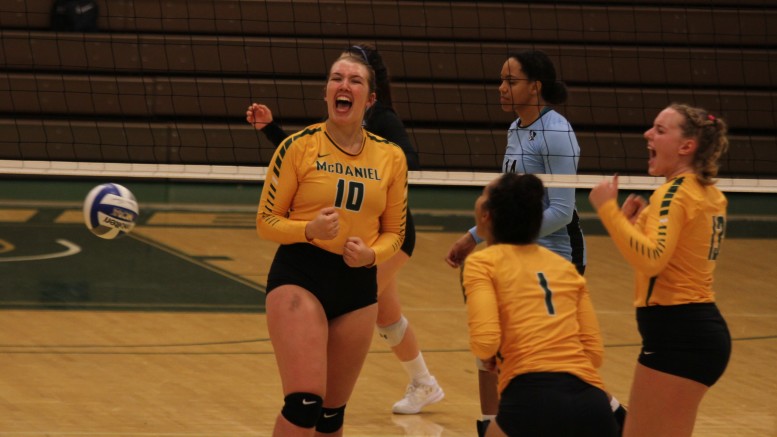 Tipping off and closing out Saturday’s homecoming festivities from a vibrantly decorated Gill Center was McDaniel volleyball who faced off against Muhlenberg and Lancaster Bible College.

The tri-match marked the final home match of the regular season for McDaniel who finished with a conference loss to Muhlenberg (23-4, 7-1) before bouncing back to sweep Lancaster Bible (12-15) in three sets.

Despite finishing with a loss over the weekend, the highlight of the tri-match was the honoring of senior team members Teryn Rath and Allegra Berry.

Rath captured the energy surrounding her last home matches and applied it to her play as she led the Green Terror in kills in the loss to the Mules.

“It was electric,” Rath said. “I felt that everyone was working really hard and pushing to do their best.”

The effort from the Green Terror proved valiant as they took Muhlenberg to four sets. The Mules narrowly took the first two sets 25-19 and 26-24 before McDaniel responded, dominating the third set 25-15. The Mules would kick back, winning the final set 25-21.

Muhlenberg’s attack was driven by a wicked one-two punch in Maggie Enestvedt and Kelly Tornetta. In total, the duo racked up 35 kills: Enestvedt smashed 20 and Tornetta ripped 15.

Brushing off the dust from the loss to the Mules, the Green Terror saddled up once more, racing by the Chargers en route to a 3-0 sweep.

McDaniel’s offense stemmed from Lauren Wells’ passing as she led the team with 16 assists. Meeting the ball on the other end of Wells’ assists was Emma Lorenzen who led with nine kills.

The effort from Lancaster Bible was reflected by Myranda Kremmer’s match-leading 33 digs. Passing was also crucial to the Chargers as Allison Shuey dished 18 assists.

As the Terror’s matches with the Mules and Chargers waged, Berry enthusiastically cheered from the bench and participated in the team’s celebrations.

Berry, the four-year team manager, was honored next to Rath for her contributions and dedication to the team.

“There is so much this program has given me,” Berry said. “It has been such a special opportunity.”

Both Rath and Berry were thankful for all involved with McDaniel volleyball.

The season for the Green Terror is far from over as they have two final conference matches against Dickinson and Ursinus this week. With wins over both necessary to ensure playoff contention, the plan of attack is simple.

“Work our butts off,” Rath said.

The Green Terror travel to Dickinson Wednesday with their eyes set on clinching a playoff spot and keeping the season alive. Game time is 7 pm out of Carlisle, Pa.

Upcoming Home Games You Should Attend