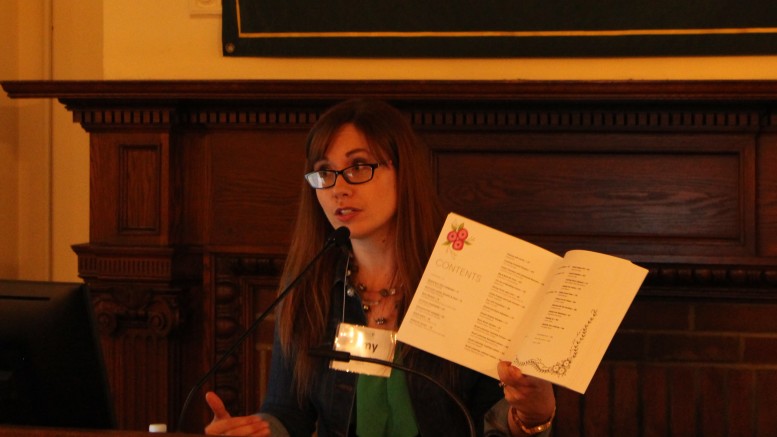 Amy Davidson Latta has been writing as much as you would expect an English major to be. Maybe more. She’s also put her minor in education to good use.

The award-winning craft blogger and 2002 graduate of McDaniel released her first book on July 11, which promptly sold out in early August.

“The reception has been incredible,” Latta said at a workshop at the college last month. “They printed 7,000 copies and right away people were telling me that they couldn’t get it.”

The book, Hand Lettering for Relaxation, proved so popular, Latta feared that she wouldn’t be able to get the 50 plus copies that were needed for the workshop where she led attendees through the book’s various exercises.

“It was absolutely crazy for a new book like that, especially a specialty book, to go to reorder within the first month,” said Latta.

But it should come as no surprise to those who have watched Latta’s online following grow over the last few years.

Since launching One Artsy Mama, her award-winning craft blog, Latta has gained about 20,000 followers on both Instagram and Facebook.

She thinks the publisher may have underestimated her following.

“I had been promoting [the book] on my Facebook and Instagram so there were a good number of people that already knew it was coming and had pre-ordered,” Latta said.

Latta first launched One Artsy Mama in 2011 when she took a break from teaching to stay at home with her newborn son, now 9 and the integral “Little Crafter” on her blog.

“It was St. Patrick’s Day and I sat down and made the most terrible blog on Blogger,” said Latta. “I just wanted to get all these ideas up there.”

For a while, Latta thought the only visitors she would have would be her mother, best friend, and husband.

“And then I started to see people popping up who had read my blog,” she said. “It was the coolest thing to know that there were actually people out there who wanted to read my blog.”

The few visitors quickly built up to her near-20,000 followers.

They also turned into her first book deal, which she first thought up around Christmas of 2015.

After talking with publishers for a few months, Latta reached a deal in March 2016 with Page Street Publishing in Salem, Mass. which specializes in adult coloring books and cookbooks.

Naturally, Page Street Publishing was interested in a book that would take their coloring audience one step further.

“Instead of coloring other people’s stuff, you can color your own stuff,” Latta said.

The hand-lettering renaissance came about two years ago on Instagram and Pinterest. Latta stresses that while it’s everywhere now, it was just starting to be everywhere back then.

“As we get more technological, there’s a drive to go back to where we came from,” said Chloe Irla, professor of art at McDaniel College. “I think what Amy is doing is definitely relaxing. It can be really relaxing to sit down and create your writing again.”

At the time, many of the tutorials only made sense to artists.

And Latta saw her window of opportunity.

She made things simple, easy and doable and captured an audience that had been left out of the craze that primarily focused on those with existing artistic ability.

“A lot of people start people out with the brush technique which is really frustrating. So starting out with the faux calligraphy can be really helpful,” said Latta.

But she couldn’t have done it without her background at McDaniel.

“I was using my McDaniel education to break things down into their simplest forms,” said Latta. “I think that’s honestly how I got the book deal.”

Her friends have noticed her educational background emerge, too.

Latta’s publisher has since put in a second order of Hand Lettering for Relaxation which hits the shelves at the end of the summer. The team has also begun work on another hand lettering book geared toward children.