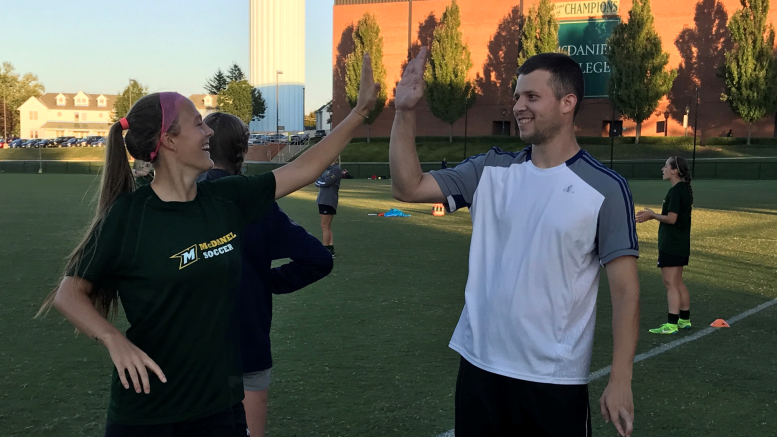 Special Olympics has been an organization in Carroll County for more than 25 years. The purpose of their organization is to provide sporting opportunities for any individual who has an intellectual disability. The organization first only offered skiing and track and field. As the program’s success has grown, so has the program itself.

“We want to provide programs that help our athletes become better speakers and provide a stage for them to shine as athletes, as well as people,” said Laurie Brewer, director of Carroll County Special Olympics.

This is what the Carroll County Special Olympics seven-on-seven adult soccer league is hoping to accomplish this fall when partnering with the McDaniel women’s soccer team.

“A partnership with McDaniel women’s soccer program offers our team an opportunity to practice alongside players who compete at a very high level, and to learn from an outstanding coach, Sandy Lagana,” said Todd Reilly, coach of the Carroll County Special Olympics soccer team.

Reilly was surprised to find that Lagana, the head women’s soccer coach at McDaniel, was excited at the idea of both teams working together.

“I know how hard Coach Sandy and the team work during their season, so when I reached out to Coach Sandy, I hoped only to get some advice and suggestions for how we could best prepare our team for the coming season” said Reilly.

Lagana referred to the relationship between the two teams as a “partnership”, a term that Reilly agrees fits perfectly with the goals that both teams share.

Reilly’s Special Olympics soccer team competes as a “unified team” in Carroll County. On his team, some of the players are “Unified Partners,” fully-abled individuals who play alongside the Special Olympics athletes.

Reilly has goals for his team. First, he hopes that by the end of the season, all his players will learn to love soccer and will have fun learning individual and team skills. Another goal he has for this season is “that both the athletes and the unified partners (and anyone watching) will learn that they, the athletes and unified partners, can compete effectively alongside one another and contribute equally to the success of the team.”

His team participates in games against other Maryland county teams, including Howard and Frederick Counties. They also compete in Qualifiers, which are regional tournaments organized by different county soccer programs. Reilly said that their objective this season is to compete in the Special Olympics State Soccer Tournament that is held at the end of October.

The McDaniel women’s soccer team and coaching staff has held a few joint practices this fall for the Carroll County Special Olympics Soccer team. They will continue to have joint practices each month.

Lagana had never been a part of something like this before, so when she was preparing for their practices, she said that her goal working with any unfamiliar group, regardless of age, is to make it a fun experience.

“Our focus is always on them [in the] hope that they learn to love the game,” said Lagana.

She added that after their first practice together, she had never left a practice feeling so good.

Reilly said that after just having one practice with the McDaniel women’s soccer team, the partnership had already far exceeded his expectations.

“Coach Sandy had put together a series of drills and activities that kept all of our athletes engaged and working for a full hour practice,” Reilly said. “The energy provided by the McDaniel players was amazing. Our athletes responded to their encouragement with a level of effort and enjoyment we just can’t achieve at our practices.”

Both the Carroll County Special Olympics and Frederick County Special Olympics soccer teams and their families joined the McDaniel team for their Sept. 23 match against Swarthmore on the Hill. The Special Olympics teams helped introduce both sides’ starting 11, by giving high-fives to players as their names were called. Both teams stayed to support and cheer on the Green Terror from the sidelines during the hard-fought game.

During half time, the Special Olympics teams got to play against each other in front of a very large crowd.

“It was a very unique experience for my team, and I think that it was an amazing experience for all of us athletes, unified partners, coaches, and family members,” said Reilly. “I was incredibly impressed with the lengths to which the McDaniel coaches and staff went to make this such a rewarding experience for our team, and to make everything run so smoothly all while playing and winning a highly competitive game against a tough opponent.”

Lagana hopes that the partnership between McDaniel Women’s Soccer and Carroll County Special Olympics soccer team continues for the years to come.