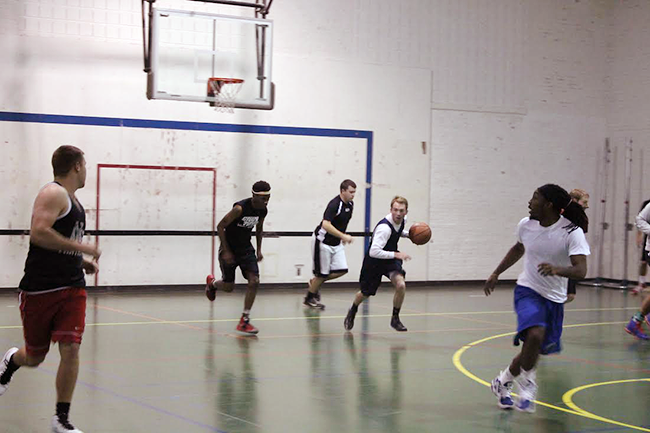 The grand prize is only a t-shirt, but the players who compete for it in McDaniel’s intramural sports take it very seriously.

Last week in Old Gill Gym saw the start of the season for intramural basketball and floor hockey. With five weeks left in the semester, each sport will have four to six games leading up to the playoffs, where one team in each sport will earn the privilege of wearing their victory on their chests.

The McDaniel Intramural Sports program, run by Scott Singleton, allows students to join a sports team without the time commitments and skill requirements of collegiate teams.

Intramurals are about having fun and getting together with friends and getting some exercise, says Singleton.

With no practices and only a handful of games, the intramural program appeals to students who may have been too busy to join regular teams. There are also more opportunities to get involved with sports that would otherwise not be options, such as Ultimate Frisbee or badminton.

Despite not being as high profile as the official college teams, the intramurals do generate some buzz around campus. Many of the athletes belong to fraternities and sororities, which tends to bring out a crowd, and some of the teams actually do have a decent following of fans that attend the games to root for them, according to Singleton. Some of the participants may even be athletes on their off-season with a group of fans that come specifically to watch that particular player.

“I think what we’re doing here is talking about the social impact that it has and the camaraderie that is developed,” says Singleton.

Another advantage of the intramural program is the accessibility to students of all skill levels. Since there are no requirements for skill, there is often a diverse mix ranging from beginners to advanced players and everything in between. This makes room for students who either want to improve their skills or just have fun with friends. Whether a student is brand new to the sport or a seasoned veteran, there is a level of play that will match up with his or her talent level.

Andrew Rempe, a senior who previously played intramural floor hockey, said, “I like intramural sports because they allow students to get active with friends and satisfy their competitive spirit.”

Singleton describes the games as “fun but extremely competitive.” Everybody who plays wants to win at least one of those t-shirts before they graduate. It might just be a shirt, but the meaning behind it makes all the difference. 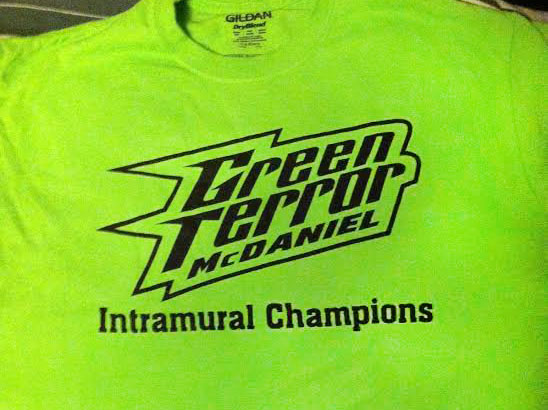 McDaniel students compete in intramurals to have fun and to win coveted intramural championship t-shirts. Photo by Nikki Krug.