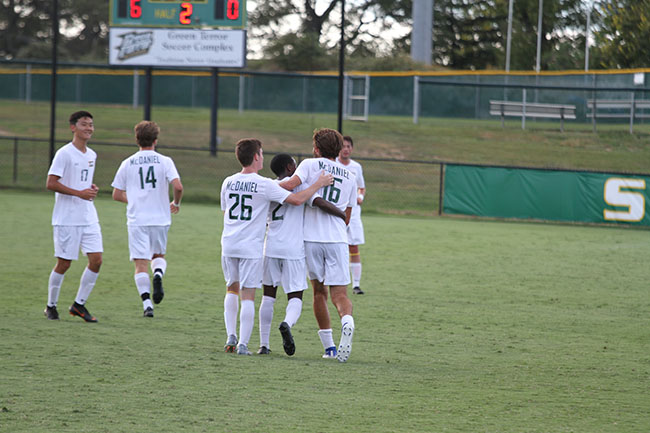 After a dominant performance on Tuesday defeating St. Vincent 8-0, the men’s soccer team pushes their win streak to 9-0. This is the best start in the program’s history.

Despite the streak and claiming the number one ranking in the Centennial Conference, the team looks to remain focused on continuous improvement.

“Something we say before every game is to make sure we stay humble,” men’s soccer Head Coach Steve Corrieri said. “You can easily get ahead of yourself and start thinking that you are too good to lose and the minute you start thinking like that, it becomes a dangerous game.”

In the last win over non-conference opponent St. Vincent (1-8), sophomore Liam Ireland led the team in goals with three in his first collegiate hat trick. Ireland was followed by Nick Starr, who bagged two goals of his own.

“It was a great team win,” sophomore Starr said. “We all did our part.”

Firing on all fronts, the Green Terror squad has netted 25 goals in nine games. Leading the scoring attack so far is junior Jacob Wells with seven goals. Starr, the recently announced Centennial Conference player of the week, leads the team in assists with six.

Defensively, the team has proved to be just as much of a force as their offensive firepower, holding their opposition to only three goals in nine matches.

However, for the team, the goal still remains to keep the winning momentum going.

“We just have to do anything we can to keep winning; it’s a high,” Ireland said. “We want to work even harder and bring intensity day in and day out.”

With the team’s focus on winning clear, the unit directs its attention to the remaining week’s practice in preparation for their second conference match-up on Saturday as they travel to face Dickinson (3-4).

“Practice and practice to get better every day,” Corrieri said on what the game plan is heading into Saturday’s match-up. “If you just show up on game day hoping to win, you will be sorely mistaken, it’s [every]thing done in practice that is implemented on game day.”

Saturday’s match-up with Dickinson kicks off at 4 p.m.