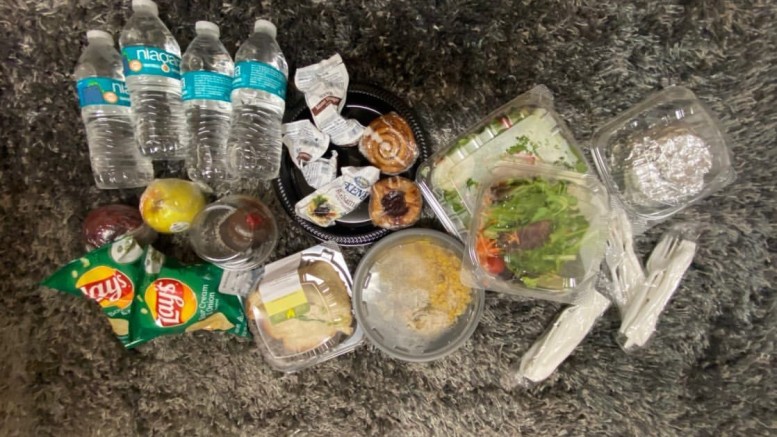 Allotted food for quarantined students is delivered all at once at 8:30 a.m. (Photo courtesy of Mary Daniel)

“I’d do anything to get out of this room,” said sophomore Mary Daniel, on day 11 of 14 of her on-campus quarantine in Rouzer hall. Whether facing isolation or quarantine, McDaniel students that are separated from the rest of the community because of COVID-19 are feeling disengaged and alone, despite efforts from the College to ensure students’ mental and physical health.

AnnMarie Walker, a sophomore, and the first student removed from campus for isolation, reflected on the process, “It’s isolating in a physical sense but also in a mental and emotional sense,” said Walker.

At 7:30 a.m. during orientation, Walker woke up with a headache and sore throat, which she entered into the Campus Clear app. She was flagged by the app for exhibiting COVID related symptoms. She alerted a college official that she got flagged on the app, and was told to stay in her dorm room.

After a long day of isolating in her dorm room, she got a call around 5 p.m. from the Wellness Center for triage. She was told that she would need to move to the McDaniel wing of the Best Western Westminster Hotel for isolation, and that Campus Safety would be in contact with her about the move.

Walker was anxious during her eight hour wait for a phone call from the Wellness Center, and her anxieties heightened further during the wait for Campus Safety to call her after she was told she’d need to move.

For Walker, packing was an emotional process, full of unknowns about how long she’d have to stay at the Best Western, if she’d be able to drive herself, and the nature of other safety protocols. Instead of using College transportation, Walker was able to drive herself to the Best Western, where she met Campus Safety officers who brought her “a substantial amount of food,” including fruits, granola bars, and water bottles.

The next day, Walker was able to drive to the Westminster Agriculture Center, which provided a 24-hour COVID-19 test. In the meantime, she was able to enjoy the luxuries of the hotel room. Walker said, “It was pretty nice, actually […] I had hot showers, had TV with cable, and there are two double beds in the room.”

For each day Walker was in isolation, she received multiple calls from a Wellness Center counselor, who checked in on Walker’s physical, mental, and emotional health. Walker was also able to keep her own morale up by taking walks outside.

After three nights at the Best Western, Walker received a call from the Wellness Center at 9 a.m., alerting her that her COVID-19 test was negative. She received another call shortly after letting her know that she was clear to move out of the Best Western, and Walker was back on campus by 10:30 a.m that same day.

Despite the isolation and fear that Walker faced, she said of her experience at the Best Western, “Of all the places you could be, it is definitely a good option. I think if you needed anything the school would bring it to you. With me at least, they were emailing and calling a couple times a day to check in and see if I needed anything at all.”

Daniel, on the other hand, has had a much more trying experience. She’s been quarantining in her dorm room in Rouzer Hall for 11 days now, with no escape aside from quick trips to the bathroom.

Towle asked Daniel a variety of protocol-based questions related to how long Daniel was in contact with the positive-testing student, how long Daniel had her mask off, and if she was feeling any symptoms. Because Daniel had been tested the same day as the student who had tested positive, it was too close to call. Daniel was told that she needed to be quarantined.

The Carroll County Health department contacted Daniel and told her information about when she could be released, as well as other safety protocols.

The wellness center called Daniel every day to check up on symptoms. However, the experience was frustrating for Daniel, for a multitude of reasons.

“I wish they could have tested me again to clear me early. I wouldn’t mind taking another test,” said Daniel. The college did not test Daniel after she was put into quarantine, and they did not offer to do so.

Additionally, Daniel felt extremely detached from the rest of campus. “It’s been really sad because I’ve just been stuck in the room while all my friends have been outside having fun. I just feel like I’m missing out on everything,” said Daniel.

Walker felt similarly detached at the Best Western. “It was very strange being separated from campus. It was during move in and orientation and I was supposed to be meeting my mentees, but I was happy to have friends to FaceTime, text, and I was talking to my parents. It was very weird not being on campus when things were happening,” said Walker.

Both Walker and Daniel faced serious issues with the food, which was supplied by Glar. All of the isolated or quarantined student’s meals for the entire day are delivered in the morning, around 8:30 a.m.. “Normal Glar isn’t the best, Glar reheated is worse,” said Walker.

“They send out a multiple choice survey for what you want and it’s pretty much the same thing every day,” said Walker.

“It’s so bad,” said Daniel. “They give us everything we pass over in Glar. I can’t eat the food […] I haven’t had real food in almost two weeks.”

Daniel also shared interest in more virtual activities. “I wish the school had more virtual stuff that people in quarantine would be able to do. Having activities to keep us connected to society would help, because I feel so disconnected.”

Both Walker and Daniel shared their concerns with administrators.

With the threat of COVID-19 looming over students’ heads, there are many factors that motivate students to act safely and responsibly. While it’s clear that respect for each others’ health is motivating for many community members, the challenges of quarantine and isolation both serve as strong warnings to engage in safe behavior.