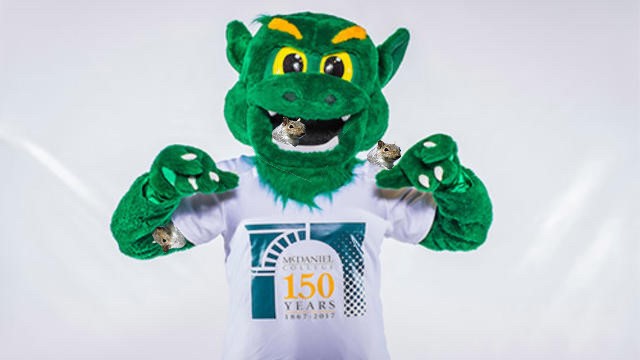 Every college swears they’ve just got the quirkiest little squirrels. On any tour on any campus where there are squirrels, a preppy guide will be sure to mention how these oversized, bushy-tailed rats dive into trash cans and eat garbage just a teeny tiny bit different than everywhere else. But they’re all full of it. You want the actual proof that McDaniel has the most unique squirrel variant around? I’ll give it to you.

You know how the Green Terror Mascot will be walking around sometimes? You know, posing for pictures, waltzing through Glar like he owns the place, generally making everyone uncomfortable? Let me ask you something: have you ever seen a single squirrel outside while the Green Terror is on the prowl? I sure haven’t. I follow that green knucklehead around from a safe distance every time he comes out, and every time somehow I have seen ZERO squirrels. Either the squirrels fear the Green Terror, or – bear with me- the squirrels ARE the Green Terror.

My suspicions began just a few months back as I was sitting at the fountain eating some fries from the Pub when this squirrel came up just giving me this god-awful glare. Our eyes were locked for an uninterrupted three minutes before I finally gave into intimidation and threw a fry to it.

It looked at the potato stick flung at its feet then back to me before taking a menacing step forward. I could tell that it meant business. Now, I looked away for one second to grab another fry to throw, and when I looked back up the squirrel had vanished. I looked around to see where it went, but I found no squirrel. What I did find was the Green Terror passing by, giving me a friendly wave as he passed.

I swear to you: I saw a squirrel tail for a split second retreating into the mascot’s head.

I’ve been investigating this ever since. My evidence has been substantial in my opinion, but still inconclusive. I considered pulling the head off Scooby-Doo-style to figure out if he’s really being operated by squirrels or not, but I haven’t had the courage to get close. Can’t have him knowing I’m onto him. Even writing this article might be a horrible idea. Is the school in on it? Can anyone be trusted? Believe me or don’t, call me whatever you’d like.

But to you brave, ignorant souls who still find innocence in that big, green oaf: I challenge you to go near the beast. Get your picture taken with him, lean in close for a selfie and listen carefully. Tell me, do you hear the squirrel chatter?