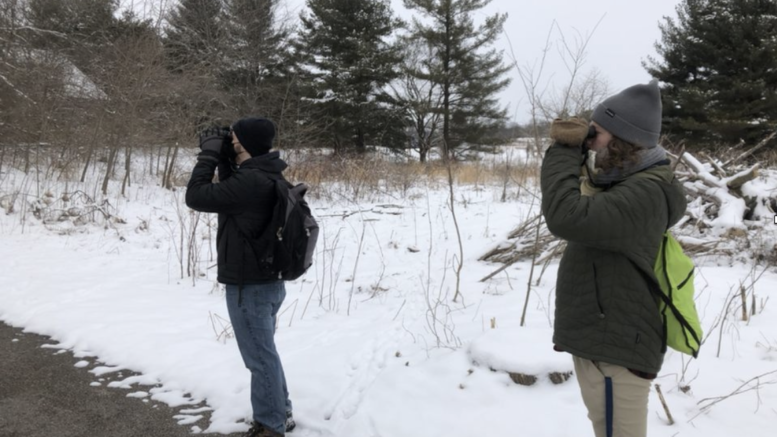 Spring is coming, and with that, the birds! Every year, Cornell Ornithology Labs hosts the Great Backyard Bird Count, and this year was no different. This bird count, spanning from Feb. 12 to Feb. 15, is a citizen study that focuses on seeing and hearing the birds in our area that come out this time of year. For McDaniel students, this brings the opportunity to join a national study, helping to list birds naturally found within our area.

For myself and a couple of other students, this was one of the first bird counts we’ve ever been a part of. With such a great educational opportunity, there was a wealth of knowledge available for those who sought it.

Freshman Harrison Booth’s favorite takeaway was the ability to make the distinction between American Crows and Fish Crows. “Fish Crows versus American Crows. I learned about fish crows and that was really exciting. To differentiate between the two we’d ask, ‘Are you an American Crow?’ and when they’d caw in response ‘nyerh-erh’, we’d know that we’re dealing with Fish Crows.”

The Great Backyard Bird Count paid off well for the McDaniel students involved, as our campus observed over 15 bird species. Among these were some stunning species, such as two golden crowned kinglets.

These kinglets love coniferous trees, so the pines of the campus golf course are perfect for this species. Typically, this bird is only found deep within the Appalachian mountains of West Virginia at this latitude. To find these anywhere else, you need to go to New York and beyond. Part of the reason seeing this bird was so special for McDaniel students, was due to the unique nature of this species’ preferred habitat.

Unfortunately, the golden crowned kinglet’s habitat stands perilously close to the brink of disaster. As climate change warms up the natural world, it poses the possibility of losing 65% of the current habitat, according to the National Audubon Society’s field guide for birds. With habitat loss being the primary driver of extinction in the Anthropocene period, these stunning birds sit as one of the most vulnerable species that we can find within our campus.

Another special species we found on the campus was a single red-shouldered hawk. This raptor, with an almost four foot wingspan, is one of Maryland’s most prominent birds of prey. What made this one great is that our campus is actually home to a nest of theirs. Red-shouldered hawks will typically return to their nest year after year, so these raptors are probably going to be here for a while. You can find their nest behind Englar dining hall, so make sure to get a look, but don’t get too close during breeding season.

That isn’t all that there was to see, for some McDaniel students. Ornithology, the discipline of zoology that focuses on the study of birds, is an inspiration for some to get even more involved. A few students from the Green Life environmental student organization on campus were particularly motivated and inspired by ornithology.

They made the most of this bird count and took initiative independently, traveling just outside of Westminster to report more bird species. Journeying to Wakefield Valley Trails, they endured the heavy snowfall to participate. The local park was home to a slew of feathered friends. At this location, which is about half forested trail and half abandoned golf course, over 50 birds were counted, spanning across 17 different species!

“Seeing the northern flicker was cool! I was really nervous about that site, but we got some amazing birds” said senior John McEachern. As a senior and chief ornithologist for our crew, he helped educate everyone at the site about the variety of calls, songs, and visual cues to identify any bird.

About a fifth of the birds found within Wakefield Valley were song sparrows, a bird that in the Spring will sing over 2,300 times a day. The males have been known to sing anywhere from 6 to 20 songs for either defending their territory, mating, or signaling to others.

All my single folks out there on the prowl, listen up! The female song swallows have been known to respond significantly better to males that know a larger repertoire of songs. They have a higher reproductive rate compared to their male counterparts with less of an array of music, so you better start working on those pipes!

All in all, this was a great year for the Great Backyard Bird Count and the students of McDaniel.

If you’re interested in joining a community of folks that are environmentally-minded, consider joining Green Life! These meetings are biweekly, on Tuesdays at 6 P.M. Email ecl006@mcdaniel.edu for more information.