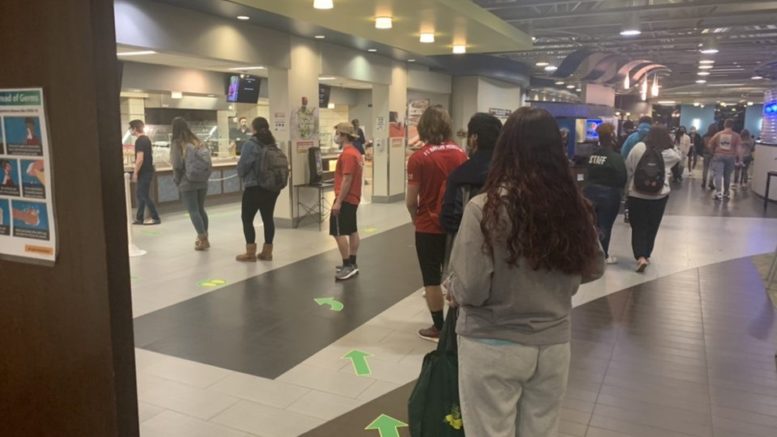 Students and staff are raising concerns and frustrations about the safety of Englar Dining Hall as COVID-19 cases rise to match the total cases from the Fall 2020 semester on week 5.

Around 7 p.m. on Thursday, Mar. 3, Free Press writers received messages and pictures of an extremely crowded dining hall. Reports shared that lines were out the door and all the tables inside were full.

“I don’t really know, from about 5:45-5:50 to about 7:15 it was just constant waves of people just coming in, flowing in.” said Duane Echols, a graduate assistant for the men’s basketball team, who was stationed outside of Glar at the time of the events.

Grad assistants are stationed throughout Roj Student Center to ensure everyone is following COVID-19 safety guidelines. Usually, one assistant sits outside of Glar, another wanders through Glar, making sure there are four chairs at tables and people are being safe, and another strolls from the forum to upstairs.

“The line was actually wrapped around here and out into the hallway” said Echols, “The last time that happened was the first day on campus in the fall.”

“It was rare,” Bonnie Ingels added, a well known food service worker and greeter at Glar.

Will Lowthert, a freshman, suggests that large amounts of people are a mostly common occurrence. “It’s usually that crowded, but there’s been a few nights when it isn’t.”

“Usually we have a line and it flows smoothly, everyone gets in and gets out and we’re good to go,” said Echols. “Tonight it seemed like more people stayed so we had to hold the line, make sure everyone was staying six feet apart.”

Wait times for the dining hall were up to 15 minutes long, according to Ingels. “We tried, but we can only do so much, because it very seldom happens that way.”

Indoor dining seems to have contributed to some of the congestion inside of Glar.

“It’s hard to social distance, especially since you’ve got people sitting at this table right here and the line is supposed to go straight back, so we just had to make do,” said Echols.

“There were people at every single station lined up,” said freshman Brenna Mayberry. “It was probably the busiest I’ve seen it all week and last week.” Mayberry described long lines at the drink and trash stations as well. “People were everywhere.”

“That’s what makes me feel unsafe, because the line gets scrunchier, because people don’t want to be congregating where the people are eating” said Lowthert.

“It wasn’t as bad tonight, but no, it doesn’t feel covid safe. Last night or two nights ago when I described it as one of the seven layers of hell, it was packed to the point where people were like in the carpet area waiting.”

When students reserve a meal time at Glar, they receive messages asking them to keep the time they spend in the dining hall limited to 30 minutes. However, dining employees and graduate assistants report that enforcing this time limit has become difficult.

“I know that in the dorm rooms you’re not allowed to visit your friends, so at least you get that 30 minutes where you can sit down with other people and talk. Maybe that’s a thing too. More people are starting to use this as an outlet to talk to their friends and be social,” said Echols.

“Everybody came at the same time and I don’t know any other way to get around what we’re already doing,” said Ingles.

“We might have to go back to a grab-and-go type system, or maybe, as staff members out here, we can ask students if they’re getting their food and going or if they’re planning to sit down, that way that’ll make it easier, the grab-and-go students can go first that way they can get their food,” said Echols.

Lowthert suggested another solution. “If you take half of that [indoor dining] section and make it standing room, people would have more space.”

“They shouldn’t be eating in there, especially when they don’t test enough, and there are known outbreaks on campus right now,” said Lowthert.

Despite campus cases rising to a new high, students are still choosing to dine indoors. As of Mar. 3, there have been 36 cumulative positive COVID-19 cases within our campus population since Feb. 15.

Concerns were amplified by one student who reported hearing lots of the contact tracing was coming back to Glar, because people were exposed to each other without wearing masks.

“I’ve heard that that’s where most of the covid contact tracing is happening right now.” said Mayberry. “A lot of people who are quarantined are quarantined because they ate with someone in glar who tested positive. At least that’s the rumor.”

This rumor is not substantiated with any data. We reached out to Dean Towle for comment on Wednesday night and will update this article when a response is provided.

In closing out the interview, Lowthert was asked “does that feel safe?”

This is a breaking news story and will be updated as more information comes in.