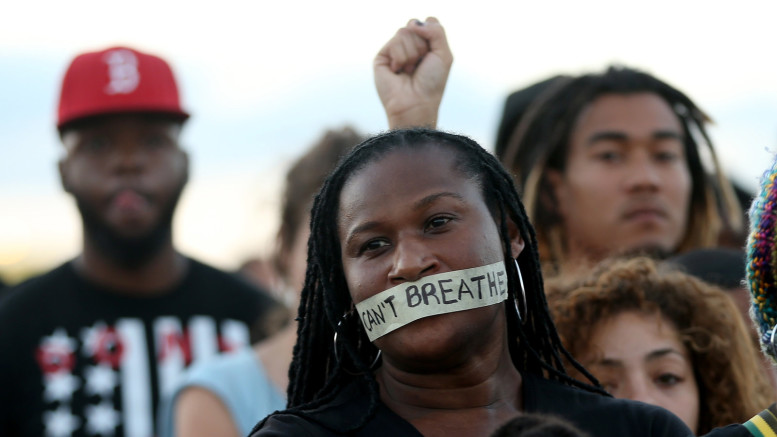 Demonstrator protesting in response to the murder of Erick Garner, 2014. Image courtesy of Joe Raedle/Getty Images.

“A riot is the language of the unheard,” Martin Luther King explained 53 years ago.

Protests are raging nationwide in response to the murder of George Floyd. Floyd, moved to Minnesota to “to be his best self,” said friends, according to a piece on CNN. He was a friend to many, a brother, a son, and a favorite worker. “Knowing my brother is to love my brother,” said George’s brother, Philonise Floyd, to CNN’s Don Lemon.

The police officer who allegedly killed Floyd had 12 police brutality complaints in the Minneapolis Office of Police Conduct complaint database prior to this incident. The complaints were all listed as “closed,” “non-public,” and “no discipline.” In 2005, this same police officer and another caused the death of three people in a car chase, according to Communities Against Police Brutality.

With all of this concern and evidence reflecting his continuous endangerment of civilian lives, it begs the question of why no action was taken to correct his behavior or remove him from authority.

Time and time again, we are facing a crisis of accountability in our systems of government and law enforcement. Police must be made accountable to the public, the people they are sworn to protect.

To rectify the countless unwarranted civilian deaths and prevent future contingencies, we need a public record of police transgressions with watchdog parties to monitor indiscretions and complaints. They must put pressure on precincts to disclose police misconduct and take necessary disciplinary actions.

Citizens make mistakes that put them behind bars and give them a criminal record. Police make mistakes. What entitles the police to immunity or lack of accountability? If criminals have their record public, police must too.

Why are police permitted more privacy than civilians? To hide their wrongdoings? Shouldn’t those with such immense influence on human lives be held more accountable than the average civilian? We all must be accountable for our actions.  There is no reason a badge makes one exempt from morality.

This is public civilian law enforcement. Public servants must be held accountable to the public. We deserve more transparency in the systems that control, and sometimes end, our lives.