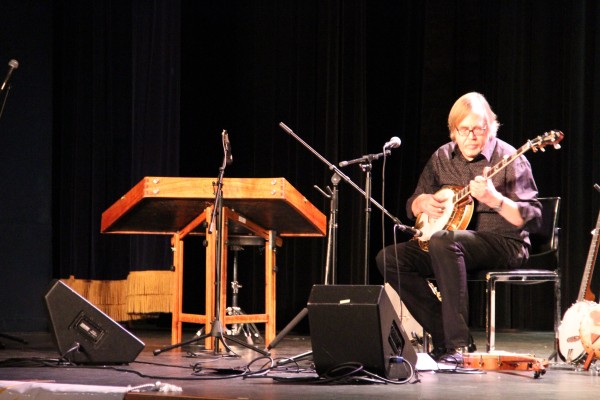 Imagine your American history class coming to life with unusual instruments, sing-alongs, and a Beatles medley. Tony Trischka’s two-hour banjo concert on Nov. 1 included all of these and more.

Trischka is not only a world-famous banjo player, but also a storyteller steeped in the cultural history of the music. During breaks, he talked about the significance of the instruments and his next song on the setlist.

Trischka played a number of songs that ranged from the beginnings of the gourd –an early African banjo – to a rendition of “Twinkle Twinkle Little Star.” He performed the earliest known banjo tune, “Juba,” named after the minstrel who originally played it.

Before attending his concert, I had never seen a banjo performance, and I was fascinated by his quick-moving fingerpicking and the years of practice it had taken him to reach and maintain his level of playing. Admittedly, I wasn’t expecting to enjoy it as much as I did, but the fast pace with which he played and the beautiful outcome was too impressive not to like.

I was also possibly the only audience member under 50 – which was a little surprising, considering how close the Carroll Arts Center is to McDaniel’s campus. It’s only about a ten minute walk into town and the ornate building is impossible to miss.

Trischka was very interactive with his audience, and at one point encouraged them to sing along with his more contemporary banjo renditions –even the light director couldn’t resist the infectious melodies. The audience was at ease calling out titles of Earl Scruggs songs that they wanted to hear and erupting in shouts of appreciation and applause after nearly every one of Trischka’s songs.

This unique event was not something I or other northeasterners get to experience very often. Common Ground on the Hill, founded and directed by McDaniel’s own Walt Michael, will hold many more concerts like Trischka’s in the coming months. You can find out more at http://www.commongroundonthehill.org/