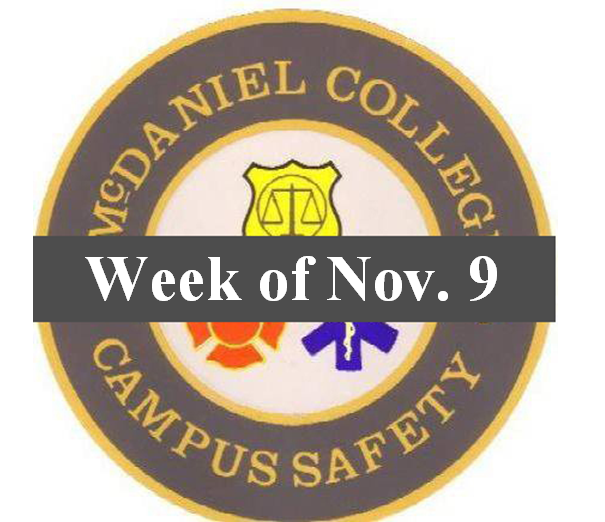 It seems normalcy has again returned to the semi-peaceful campus of McDaniel, with no major alerts or serious incidents in the past few weeks. Now it’s all smooth sailing, with a smattering of standard bits of collegiate criminal activity. So without further ado, let’s begin.

Now, guys, I know clothes are restrictive and all and we’d all love to live in a world where we could be free to show our bodies, but McDaniel isn’t a nudist camp. And I don’t foresee it becoming one anytime soon, so if you’re one of the three people caught with decency offenses this week, you’re out of luck. Especially the one of you who decided to publicly urinate, because honestly, was a toilet that hard to find? Or even somewhere secluded enough that you wouldn’t both get caught and possibly traumatize passersby? Probably not, either that or you just couldn’t be asked to care.

Speaking of people who couldn’t be asked to care, a big shout-out to the people who forgot to care that their breakfasts were burning this week, to the ire of all their room and building mates. Specifically, the cooking fire alarms that went off on Pennsylvania Avenue, and the “other smoke” alarm that went off in North Village. I’m going to be nice and naïve now and just say that “other smoke” was definitely just someone lighting a candle, right guys?

Now DMC seems to be going over to the dark, or should I say, the dank (I am so, so sorry for that joke) side guys, with another case of controlled dangerous substances and paraphernalia reported — in fact, the only such case on the entire campus. Though I suppose we should just give them a bit of a backhanded compliment that at least while they did get caught, they managed not to set off any fire alarms in the process.

Meanwhile, the party raged on with a number of alcohol charges, including possession of alcohol under 21 incidents in North Village, DMC, Blanche Ward, and two in McDaniel Hall. Also there was an under 21 incident and a hard liquor incident not in Rouzer itself, but in the Rouzer parking lot, which seems like either a case of really bad luck, or someone just asking to get caught. It’s one thing to be drunk in your room, it’s a whole other to be drunk out in the open; the difference mainly is how little pity I’ll feel for you when you get busted and how much I will laugh. There were also hard liquor incidents in North Village and DMC.

Lastly, we get to the new perennial crime of McDaniel, Malicious Destruction of Property. Now we had one case in Albert Norman Ward, no real surprise or novelty there. But there was also an incident at the Golf House, which strikes me as a little strange. I mean look, I’ve never been much a fan of the sport either, and those outfits some golfers wear are without a doubt garish as can be, but let golfers be golfers. And no you can’t recreate that scene at the end of Caddyshack with Bill Murray, the gopher, and all that C4, as awesome as that would be (also Mythbusters tested that one — way less spectacular than in the film). Anyhow, that’s this week. Keep up the good work with these non-serious crimes McDaniel.

Spring Fling: A Day to Remember

Smoke on the Hill