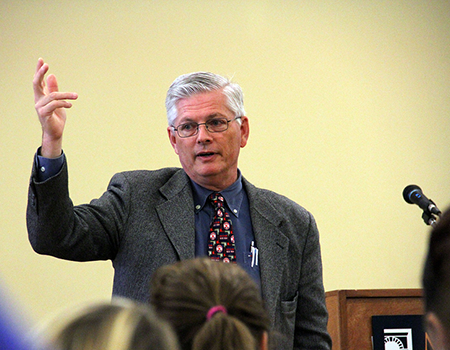 Mike Webster, Director of Campus Safety, instructs students on appropriate protocol during an assault by an active shooter during a Campus 411 in Oct. 2013. Webster will retire as the Director of Campus safety at the end of this year. (Photo by Melanie Ojwang.)

“[Webster] has done a tremendous job of ensuring the security of our community,” said Gerl.

Webster, in addition to his role in Campus Safety, has taught as an adjunct lecturer in the sociology department since 2011.

According to Gerl, Webster has been actively involved in security and campus safety issues affecting higher education. In the past, Webster has served as the Government Relations Chair for the International Association of Campus Law Enforcement Administrators (IACLEA), through which he had the opportunity to participate in Negotiated Rulemaking with the U.S. Department of Education for the Clery Act, the Higher Education Opportunity Act of 2008, and Clery Act amendments under the Violence Against Women Act reauthorization.

Webster was also a content reviewer and contributor for the Campus Crime Reporting Handbook and the Handbook for Campus Safety and Security Reporting published by the U.S. Department of Education to facilitate compliance with the Clery Act requirements.

Gerl noted that in the community, Webster “has overseen a strong public crime prevention and education program,” and he “participated in planning special events including summer training camp for the Baltimore Ravens.”

“We thank Mike for his leadership and for his work on building a robust campus safety operation here at McDaniel,” said Gerl.

A national search for Webster’s replacement will soon be underway.