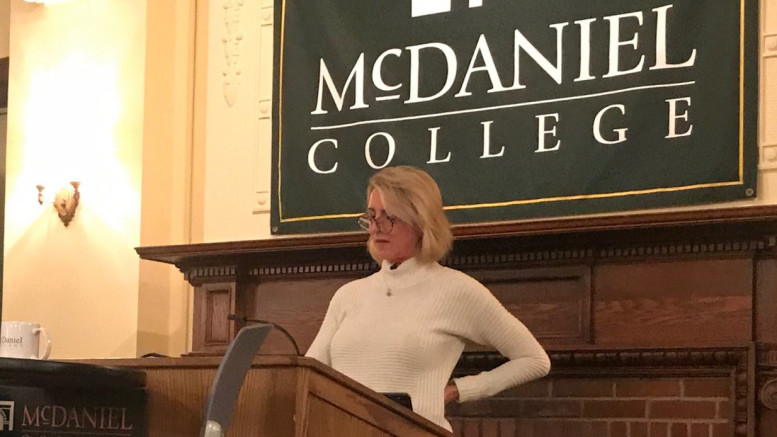 On Nov. 13, Jennifer Wuamett returned to McDaniel as the featured guest in the latest SmartTALK. Wuamett graduated with highest honors from Western Maryland College in 1987 with a degree in biology and chemistry, and earned her Juris Doctorate from Arizona State University in 1995, graduating second in her class. She is currently the executive vice president and general counsel of NXP Semiconductors, one of the leading semiconductor manufacturers in the world.

“When I came to the Hill, I had no idea what I wanted to be when I grew up,” Wuamett said. “I knew I liked biology and I knew I liked art, so my mom suggested I become a biomedical illustrator.”

She credited her college experience for teaching her the ability to reason critically and to resolve issues creatively.

“McDaniel helped me become a problem-solver, a curious and open-minded adult, with a range of interests and opinions,” she said.

“I still treasure all my memories from my years here on the Hill,” she said. “Those were quite formative years for me. They gave me a great foundation on which to not only build a successful career, but a great life as well.”

Following her talk, Wuamett engaged in a 45-minute Q and A session with Casey, with questions supplied by the audience prior to the event. There was one particular question about how her gender had played a role throughout her career.

“As a patent attorney, I was used to being the only woman in the room,” she responded. “I am today still the only woman on the management team at my company. There are seven executive vice presidents and I’m the only female. As I’ve gotten further in my career, I’ve felt some sort of obligation to try to be a mentor for other women in the company.”

An overarching theme throughout the event was Wuamett’s emphasis on grit and hard work.

At the conclusion of the event, Wuamett left students with one piece of advice.

“You don’t have to have it all figured out right now,” she said. “As much as you might have it figured out, life has this interesting way of laughing at our plans and finding ways to throw us in different directions.”

Where in Westminster: American Ice Co., “Enter as Strangers! Leave as Friends…”