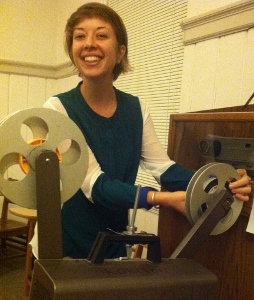 Margaret Rorison, a Baltimore filmmaker with a M.F.A. from The Maryland Institute College of Art, seemed just like any other young, passionate artist as she stood in Peterson Hall before a crowd of approximately 30, made up of McDaniel students and members of the public. There was an air about Rorison that suggested nervousness, but may have partly been attributed to her obvious excitement over the prospect of sharing her knowledge with others.

On Oct. 2, McDaniel’s Department of Art and Art History and McDaniel’s art club Ars Nova teamed up to sponsor a lecture from Rorison, who shared her personal experiences and explained the techniques she uses in her works.

Rorison’s affinity for sharing and teaching is evident in her work. She currently directs a Baltimore-based group that she co-founded called Sight Unseen, which brings together various artists and innovators to collaborate in workshops about creating film. The group produces art that continuously expands and manipulates the limits of what is considered film.

Rorison originally pursued painting and drawing, following in the footsteps of her grandfather, who was also a painter. However, according to Rorison, painting wasn’t really the best medium for her. “I felt really confined by just one frame,” she said. 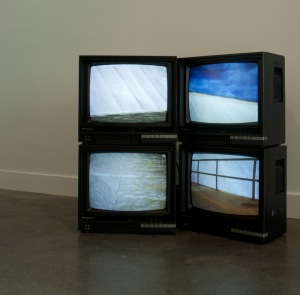 Rorison moved on to photography and making films, incorporating aspects of her life to convey feelings and emotional messages.

Her photography is unique in the way that it embraces imperfections and utilizes them to evoke feeling. Many of her still images look grainy, with specks and other artifacts. Her explanation for this is that she often uses expired film, because that’s just what she has on hand, and film can be expensive when one uses as much as she does.

She also develops a lot of her film by hand, taking more chances to make what traditional critics of photography would classify as errors. Yet she enjoys letting these errors work to her advantage. Some of the photos exhibited in the lecture showed her use of light leaks, the process of exposing undeveloped film to direct light, creating an abnormal hue to the film image. She uses these light leak images as punctuation and transition in her films.

Margaret Rorison’s first leap from photography to film was in creating animations from photographs. Her first animation, Into the Woods, was created using time lapsed photographs of costume dresses being positioned through a whimsical forest setting.

With most of her film work, Rorison strives to make them less narrative and more of what she calls “visual poems.” She considers film to be a “marriage of painting and writing,” and she tries to make images and poetry work together in her films. 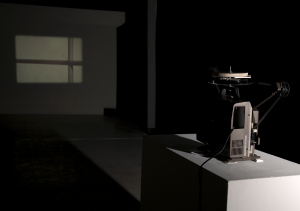 This installation by Margaret Rorison consists of a looped video projector playing her film “Scansion,” accompanied by a soundtrack consisting of audio recordings taken of Baltimore. Image Source: http://margaretrorison.com/SCANSION

The films Rorison makes, such as Scansion and Der Spaziergang, are primarily images of landscapes that she films on her walks with a hand-cranked camera. Her hand-edited films are often combined with home-made soundtracks created by the sounds of cameras, projectors, city life, and juxtaposed voiceovers.

As a member of the Red Room Collective, an organization devoted to experimental and obscure musical creation, Rorison has taken her innovative film and projection-based music to The High Zero Festival held in Baltimore.

Margaret Rorison’s work has been exhibited in venues all over the country. To view more of her work, visit margaretrorison.com.

To get involved with or learn more about the Baltimore art scene, check out photo labs and art galleries like Full Circle and Current Space.