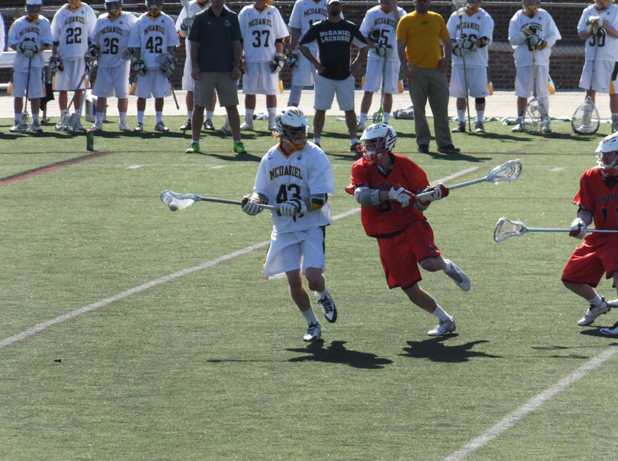 The Green Terror put together a 5-0 run in less than two minutes in the fourth quarter to take the lead from the Muhlenberg Mules and win by a final score of 14-12. Patrick Serio had a huge game for McDaniel, scoring six goals total, five of which came in the final quarter.

Almost three minutes into the game, Sean Brett tallied the first goal for both teams. This was the only goal of the quarter until Muhlenberg’s Jason Mertz scored with 3:59 left in the period. His teammate Elliot Dennis followed up with another goal 25 seconds later.  Patrick Serio of McDaniel tied the score at 2-2 with 2:41 to play in the first quarter.  Steven Casella rounded out the scoring in the quarter for the Mules with a goal 40 seconds before the horn.

Brett was the first goal of the second quarter as well less than a minute into play, followed almost two minutes later by teammate Zach Monzo. Muhlenberg’s Jon 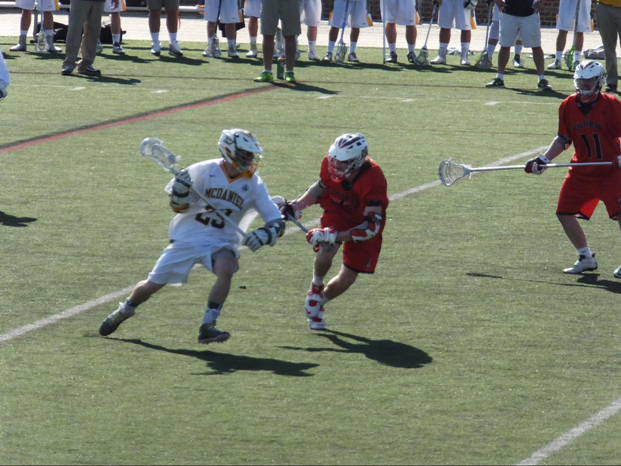 Thomas scored in a man-up situation, knotting the score at 4-all.  Troy Becker responded with about seven minutes to go, only to be followed up by two goals from the Mules (Tom Glancy and Michael Heenan).  The half ended with the Mules leading 6-5.

Once again, McDaniel’s Brett got on the board first to start off the next quarter, which completed a hat trick.  There were only three other goals in the third quarter, all by Muhlenberg: one by Pat Farrell, and two by Glancy.

The fourth quarter was the highest-scoring period of the game (a total of 11 goals were scored between the two teams).  Serio got things started this time, scoring in a man-up situation with 11:46 to play, and then again at even strength with 9:10 to play.  Farrell of Muhlenberg answered with eight minutes to go, increasing his team’s lead to two points.  Serio scored again, and Muhlenberg’s Austin Akner brought the lead back to two with 7:12 to go.

The Green Terror worked some magic in the next two minutes. Jason Lawrence and Serio each scored in man-up situations, tying the score 11-11. Serio scored 25 seconds after his extra-man goal, giving McDaniel the lead with 5:22 to play.  Kevin Nicholas and Timothy McNichol scored seven seconds apart, increasing the Green Terror lead to three goals. The Mules were unable to rally, despite Glancy’s man-up goal with a minute to play.

Head coach Matt Hatton was pleased with his team’s effort throughout the game.  “Our guys played very hard and never gave up in themselves and their teammates.  We knew that we were going to keep generating quality shots and that if we did a better job of shot placement that we would be in good shape,” he said. 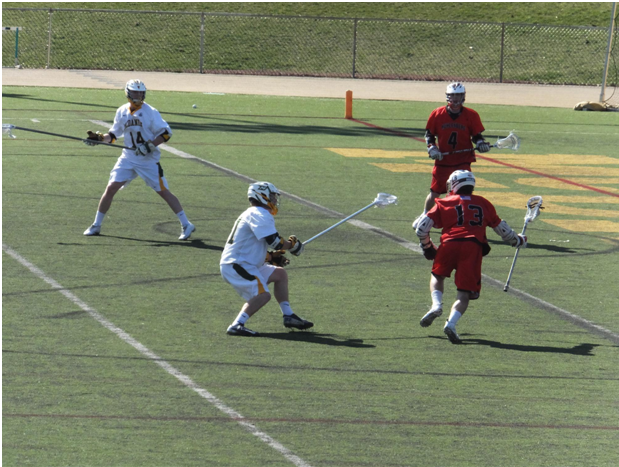 “They stayed on task, kept grinding and stayed with the game plan,” he added.  “Our freshman faceoff player, Zachary Bicho, was playing make it take it and gave us a lot of critical opportunities down the stretch that helped us break it open.  It was a total team effort and win.”

At this point in the season, it’s difficult to say whether or not the men’s team will make the playoffs.  Hatton said, “We have treated the last two games as if they are playoff games; win or possibly be eliminated.  We have two games left against two very good teams in Ursinus and Gettysburg.”

“We will have our hands full with both opponents but will take these next two weeks one day at a time in trying to get better, but also in cherishing the time that we have with the players, coaches, and personnel in our program with the hopes of expanding our time together in the playoffs,” he explained.

McDaniel improves to 6-7 for the season and 3-3 in conference contests. The last home game and the last game of the regular season is on Saturday, April 26 at 1:00 p.m. against Gettysburg.