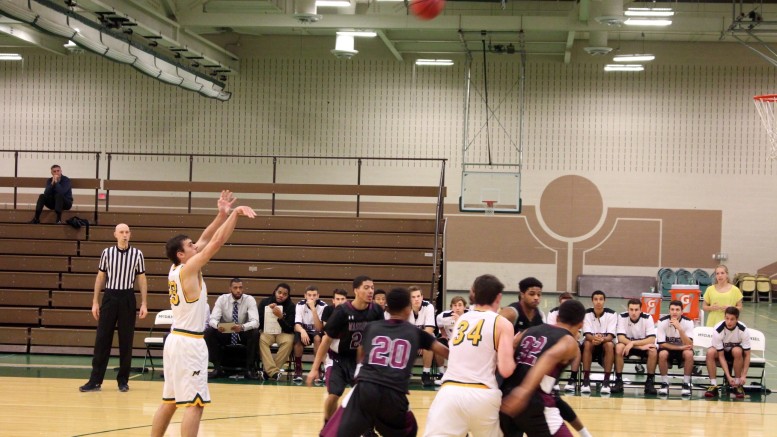 Coming off a four-game losing streak, McDaniel men’s basketball secured a win against Washington College on Wednesday night, outscoring the Shoremen 75-64 at the Gill Center.

McDaniel (3-4, 1-2) started off the game strong when sophomore DJ Harper scored the first two points of the game only 14 seconds into the first half.

Washington (3-3, 1-2) followed closely behind, scoring two points 12 seconds after McDaniel scored. For the rest of the first half, McDaniel and Washington went back and forth scoring and having fouls called against them. The Shoremen pulled ahead, 21-15 with 8:39 left in the first half. Within the last 90 seconds of the first, sophomore James McGovern scored three points off of two free throws and a layup.

Starting the second half, Green Terror sophomore Isaac Ray made a 3-point jump shot less than 30 seconds in to decrease Washington’s lead to 37-35. For next eight minutes, the Green Terror held off the Shoremen from scoring any points at all, pulling ahead 46-37. Washington was never able to recover from their eight minute dry spell, allowing McDaniel to pull ahead, scoring point after to point to ultimately win the game by the 75-64 final score.

As a team, McDaniel has 38 rebounds compared to Washington’s 27. Washington had the lower edge on turnovers, giving the ball up nine times to McDaniel’s 13.