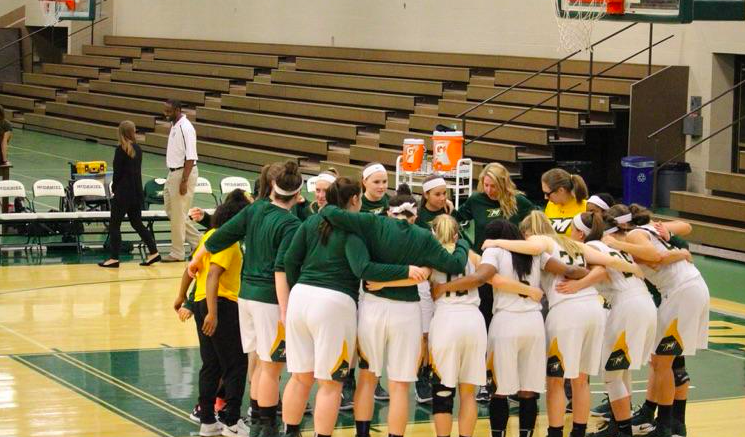 The women's basketball team during warmups.

Basketball at McDaniel generally has a good turnout in terms of student support and a vocal fan base. But something was different this time. From the first women’s basketball home opener against Chatham University it was evident that this may be one for the books.

Louder than ever, more fans than normal, and a team confidence in past years, everyone in the stands knew they were in for a great first game. Rolling to a 79-47 win, the women’s basketball team gave the fans what they were asking for.

“Get ready for a season unlike any other,” said junior guard Renie Tsomos.

Since their return to campus at the beginning of the fall, the women’s basketball team has not taken a break in preparation for this upcoming season. On Oct. 15, their preseason officially started.

The preseason for women’s basketball was intense, according to several players from the team, ticking off conditioning, lifting, and shooting drills all intended to prepare them for what’s to come.

This year, head coach Becky Martin has picked three seniors from her team of 16 student-athletes to take charge on and off the court. Jasmine Smith, Melanie Yeomans, and Libby Bowles will share the captain duties for their final season of Division III basketball. Martin has successfully been leading the women’s basketball team for over 36 seasons, and this may be one of her best squads.

“As captain, I plan to work hard every day,” said Yeomans. “I will motivate and encourage my team so we can play our best.”

Prior to the season, Martin recruited to fill her team with all the best players. The McDaniel basketball staff has been attending local tournaments, as well as hosting some of their own, to gather players with a wide range of skills; who are interested in playing basketball in college.

“Upon the graduation of last year’s seniors, the team lost a significant amount of height. Coach plans to make up for that by increasing our speed and accuracy this year,” said Tsomos. “Coach pushes us a lot harder this year. The workouts and training she puts us through helps us stay in shape and conditions us for longer and harder games. Everything is so much more fast-paced this year.”

Despite the tough loss, McDaniel proved that they could hold their own. Not only were they able to show off that they could keep up with the No. 2 team in the division, but were also able to play well enough that Christopher Newport fell to fifth in the Division III poll.

“The way we played against Christopher Newport gave us so much confidence going into conference play,” said Liv Storer, sophomore forward. “If we can play the way we did against them all year, we are going to be able to compete against the best Centennial Conference teams. It was such an awesome team win; everyone contributed and we never gave up.”

The team has practice almost every day, generally lasting about two and a half hours. While practicing, the team runs through defensive sets, shooting drills, and real game scenarios. Using the full court allows players to work on their stamina and prepare for actual games.

They also go through a breakdown of the teams that they are going up against each week. This helps give the coaches and players an insight into planning defensive sets each game.

“I recommend that the fans get ready,” said Tsomos. “It is going to be a really loud and intense season with lots of excitement.”