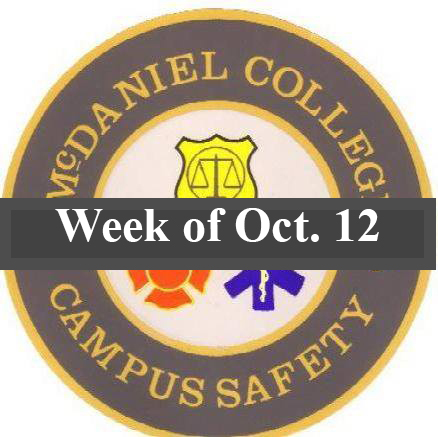 Well McDaniel, before Tuesday, I would have told you that this had been an absolutely dull week, but life’s full of surprises, isn’t it? However, I’ll be couth and refrain from making any jokes about the Great Pizza Robbery of 2014, given that it seems in bad taste (my sympathies to the pizza guy especially–that’s a terrible enough job to have to begin with) and because frankly any joke I could come up with has probably already been made on Yik Yak.

So anyhow, I would like to take a moment to address assaults upon motorized vehicles. Now, we are all aware that road rage is indeed a real thing, and that often we have all wanted to kick that random Toyota that cut us off. While I’ll admit it is funny to see people do this, the entertainment value doesn’t make it any less illegal. It just does not make sense to attack a random parked car. Not only is that stupid, but there’s not even a reasonable justification for doing it. Yet you people still do. What gives, guys? Is this some sort of weird environmentalist protest against carbon emissions, because if so, stop it and just go hand out flyers or buy a Nissan Leaf.

Speaking of vehicles, someone also straight up performed a hit and run this week in the pool parking lot. Of course it was on a car, so not as interesting/potentially deadly, but still. Granted given how people drive in the parking lots here, it seemed almost inevitable. The speed bumps are there to slow you down guys, not to test out your suspension. And certainly not to ramp off of like some college aged Johnny Knoxville/Evel Knievel lovechild, who uses a 2003 Honda Accord as his vehicle of choice. You don’t look cool–you just look like an idiot, a word you’re going to be hearing a lot from your mechanic next time you get your car fixed.

North Village returned to their roots this week with a cooking fire alarm, which was a nice little blast from the past. I’d recommend they keep it in the past, but hey, easy joke material that never actually ends with anyone hurt or any property damaged? I’ll call that a win for everyone, including myself. Well except the residents of the building, to them it lands on a scale of awfulness somewhere between 8 a.m. calculus and Glar broccoli.

Lastly, we have the inevitable drinking related crimes, which managed to surprise a bit this week. While the possession of hard liquor in Whiteford was expected, the under 21 possession in Gill Gym definitely was not. I mean, last I checked, Jack Daniels and bench pressing didn’t go hand in hand, but maybe I’m just exercising wrong. The fact is, until I see any empirical evidence otherwise, I’m going to assume that mixing alcohol and a treadmill is a one-way ticket to unconsciousness and a record number of friction burns.

Don’t ask for my sympathy